We know that the temperature on Earth changes within each period of one million years. It has been found that, about every 100,000 years, we experience a relatively short warm period, while for the rest of the time the climate is much colder (so-called ‘glacial periods’ or ‘ice ages’). At present we are living in a warm period.

Why does this happen? Scientists think that the alternation of ice ages and warm periods has astronomical causes (Fig. 1.3.6). Every 41,000 years the tilt of the Earth’s axis alters in a range between 22 degrees and 24.5 degrees (it is currently at 23.5 degrees). This variation makes the duration of polar night in polar regions longer in some periods and shorter in others. This makes no difference to the total amount of heat reaching the Earth from the Sun, but it has an effect on the severity and duration of the winter season.

The Earth’s axis completes a circular path every 19,000–23,000 years. When you spin a top, its tip points straight upwards to begin with, but then starts to make circles, and then the top stops spinning and falls. The Earth is like a spinning top. Certainly, there is no chance that it will stop rotating in the next few million years, but there has been some slow-down, and the axis of the earth is not fixed on the same spot in the heavens. The circles described by the axis of the Earth’s rotation have no impact on the amount of heat reaching it from the Sun (no more than the tilt
of the axis as such), but they do influence the severity and duration of the cold season in polar latitudes.

The Earth’s orbit around the Sun changes about every 400,000 and 100,000 years. When the Earth’s orbit is close to circular, seasonal changes in the flow of heat from the Sun are less than when the orbit has an elliptic shape.

When winters in polar regions are longer and more severe, and snowfall is greater, less snow melts in the summer, and the accumulation forms glaciers. These white glaciers, unlike the dark surface of the ground or water, reflect nearly all of the solar radiation that reaches them. As a result the cold intensifies and the glaciers continue to grow, moving from the poles into temperate latitudes. A glacial period then begins (Fig. 1.3.7).

After a few tens of thousands of years, the conditions change in a way that cause the winters in polar and temperate regions to become shorter and warmer. The glaciers start to retreat, and the climate returns to what it was before. This is what happened 13,000 years ago, when the last glacial period ended. 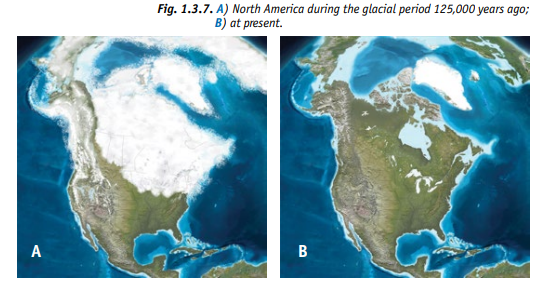 About 5000–7000 years ago the climate was warmer and wetter than it is now, and that created conditions that were favorable for the development of human civilization; but it would be a mistake to think that warming by a couple of degrees will be good for modern civilization. Human beings today have different needs and different conditions of life: abundance of grass for domestic animals and plenty of game to hunt in the forests are no longer enough for our
societies to function properly.

The level of the Earth’s oceans has changed together with the coming and going of glacial periods. During cold periods the sea level was 50–100 m below its level today. Those were the times when ancient people moved from Eurasia to America, mainly on land and for part of the way across a narrow strait covered by ice. In warmer periods during the last few hundreds of thousands of years, the ocean was at its present level or 5–10 m higher.

How many tens of thousands of years remain until the next glacial period on Earth? The complexity of periods of change of the Earth’s orbit and rotation around its axis make it impossible for scientists to predict whether it will happen in 15,000, 20,000 or 30,000 years.

Two things, though, are clear. First, that it will happen. Probably our distant descendants will be able to adapt, because the climate in central and tropical latitudes will not be much colder than it is now. Second, the next glacial period will not come soon, and it will not come on in the space of a year or even a hundred years, but the glacial movement will take hundreds and thousands of years. The prospect of a coming glacial period is of no significance for the climate in the last millennium or for the next few centuries to come.