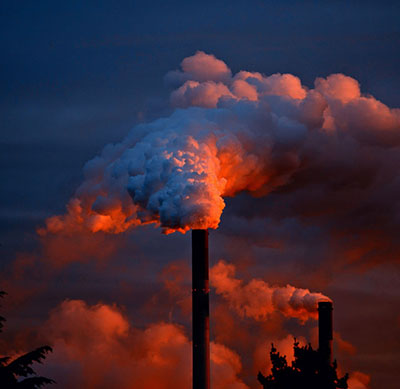 Water in the natural world
Water has a special place among the vast number of chemical compounds that are found on our planet. It flows from the taps, we boil it in kettles and it fills rivers, lakes, seas and oceans. 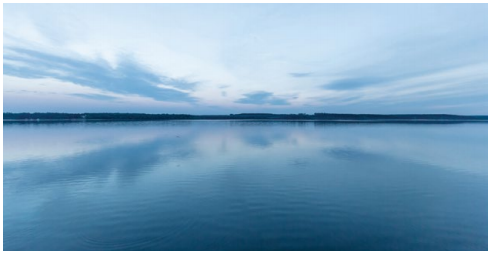 Water can exist in various states: solid, liquid and gas. When the air temperature is below 0 °C, water freezes to a solid state and becomes ice. Water comes out of taps in a liquid state, and the jet of steam from a boiling kettle is water in its gaseous state. Incidentally, the water in the clouds that we see in the sky is very often in three states at once, and that is what determines the different forms that clouds can take. 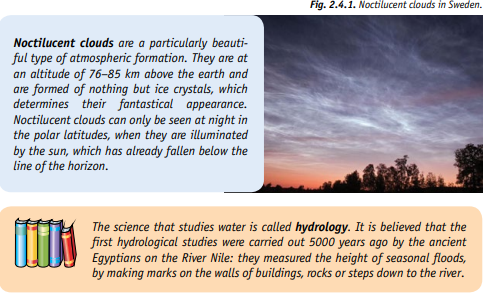 If there was no water on our planet, there would be no life: many types of plants and animals are composed in large part of water. For example, a human body is 60% water on average. This share depends on age: the body of a newborn infant is 86% water, but that of an elderly person – only 50%. It is very important for people to drink a sufficient amount of water. A person can live without food for about a month, but he can only survive for 3–10 days without water.
All water on Earth that is used or could be used by a man is called ‘water resources’. It includes all water in rivers, lakes, canals, reservoirs, seas and oceans, groundwater, soil moisture, the frozen water (ice) in mountain glaciers and polar ice caps, and even water vapour in the atmosphere. 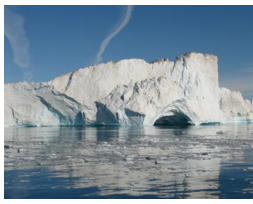 More than 97% of all the water on the planet is in oceans and seas. The water in the ocean is salty and not suitable for drinking. Less than 1% of the total volume of water on the planet is fresh water in rivers, lakes, streams and other surface water bodies. That doesn’t seem like much, but there is another vast reserve of fresh water: the glaciers and ice caps of Antarctica and Greenland. They account for 2% of all the water on Earth – nearly 8 times more than all the water in rivers and lakes combined. Preserving the planet’s reserves of fresh water  is one of the major environmental challenges facing us today: without these reserves mankind cannot survive!
Water shortage problems have become worse because of global climate change and also because of the increasing demand for food and hygiene from the world’s growing population. Since the
beginning of the 20th century the world’s population has grown from 1.6 to 7.2 billion people, that is an increase of 4.5 times! Water use in most countries has increased in recent decades due to the rapid growth of population, changes in lifestyle and development of agricultural production. About 70% of all fresh water used by man is  employed to water fields for growing crops. UN experts estimate that by 2050, nearly 90% of the world’s freshwater resources will be needed for food production.

UN experts also point out how unevenly drinking water is distributed across the continents: Asia is home to 60% of the world population, but it has only one third of the world’s water resources. According to the World Health Organization, nearly 800 million people worldwide (40% of them in Africa) do not have access to clean drinking water.
In September 2015, the United Nations adopted 17 Sustainable Development Goals and associated targets. These included the target ‘By 2030, achieve universal and equitable access to safe and affordable drinking water for all’.
How does climate change affect water resources?
All of the sources of fresh water on Earth (rivers, lakes, swamps, snow, glaciers, groundwater) are intimately related to climate. To a certain extent they are all a product of climate, although, of course, they all depend on different components of the natural world. We already know that warming of the climate in many parts of the world will probably increase the frequency of heavy rains, causing disastrous flooding. In other areas, on the contrary,
precipitation is expected to decrease, so that extreme droughts will happen more frequently. Unfortunately regions where the climate is already too wet will become even wetter and dry regions, especially regions in the central part of continents, will suffer increasingly from the effects of drought. The Intergovernmental Panel on Climate Change notes that water shortages due to climate change will particularly affect arid regions of the world, most notably the Mediterranean countries, the western United States, Southern Africa and northeast Brazil. 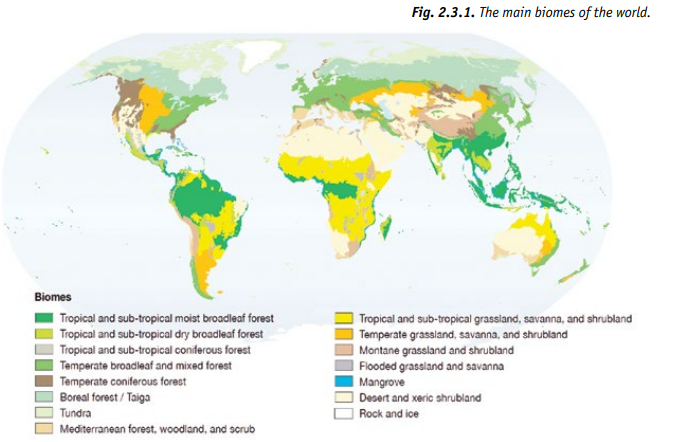 Climate change will also significantly affect glaciers and snow cover. Weather satellites show that the area covered by snow in the northern hemisphere has significantly decreased over the past 40 years. The most noticeable reduction of snow cover in mountainous areas has been observed in western North America and in the Swiss Alps, mainly at low altitudes.

Changes in the amount and the cycle of precipitation, melting of mountain glaciers and general rise in temperatures on the planet all lead to changes in the amount of water carried by rivers. Typically, river flow changes from season to season, but there are certain long-term patterns. Climate change is affecting the usual operation of rivers. The result may be major floods that inundate settlements along a river or, conversely, drying-up of a riverbed. In temperate latitudes rivers are freezing later and losing their ice earlier. These changes need to be considered in economic planning, since rivers play a huge role in the economy of many countries. They are arteries for the transportation of goods and passengers, a source of hydroelectric power, and a source of fresh water for drinking and for irrigation. 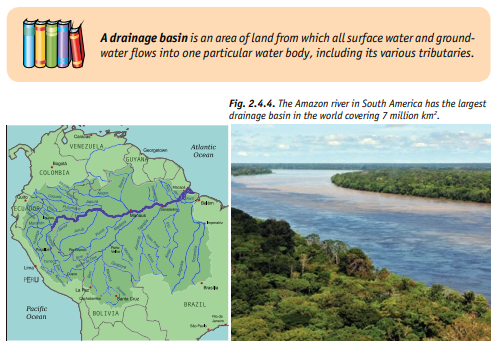 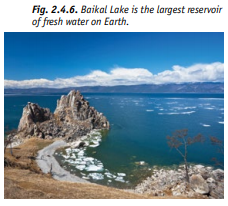 The countries that have the largest supply of fresh water in the world are Brazil (the world’s greatest river, the Amazon, flows through its territory), followed by Russia and Canada. However, the distribution of fresh water supplies around
the world is extremely uneven. Around 700 million people in 43 countries suffer today from water scarcity. Even in water sufficient countries like Brazil or Russia there are areas that already experience water stress (Fig. 2.4.8). This natural
‘injustice’ will grow more marked over time due to climate change: regions that already suffer from water shortages, will become even more arid (Fig. 2.4.2 and 2.4.7). 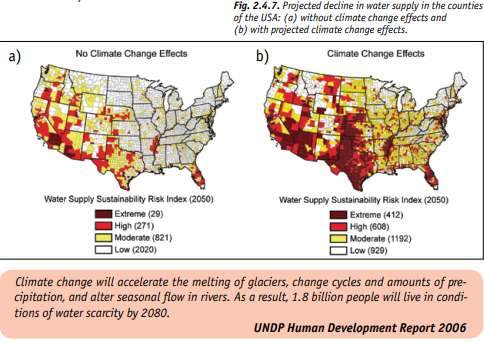 How can the risks be reduced?
Until recently, it did not occur to people who are responsible for water management that climate change would force them to review the whole system for managing water resources. Unless proper measures are taken in good time, the damage caused by sudden and severe droughts, floods or reduction of freshwater resources could be enormous.

The first thing needed is steady improvement of weather forecasting. This will help to predict the probable occurrence of severe weather events, whether heavy rain or extreme drought, in advance.
Secondly, there are many technology and engineering solutions that can reduce risks to people and infrastructure, from the construction of new dams and reservoirs along rivers to help regulate their flow to the creation of structures along river banks to protect the communities who live there from severe flooding.
Thirdly, we will have to reduce water consumption. This can be done, for example, by using rainwater or by using the same water twice for different needs. Special installations to convert salt water into fresh water by desalination are also promising (Fig. 2.4.9). Most of all we must remember to use water efficiently. 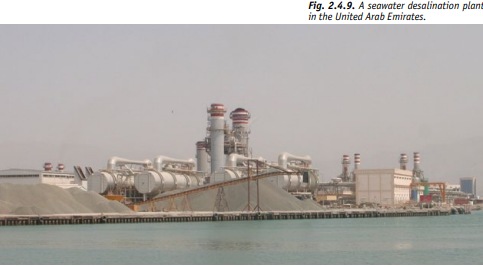 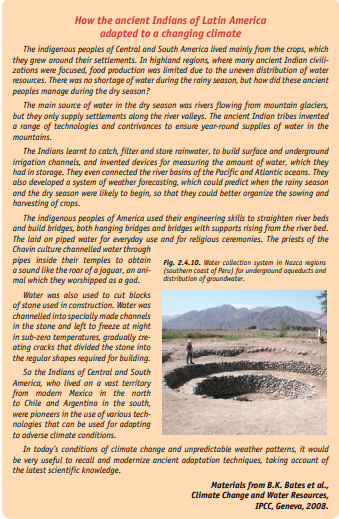 1. What do we call the science that studies water?
2. Which country has the largest supply of fresh water in the
world?
3. Which regions of the world will be particularly affected by
water shortages and why?
4. What is the name of the river basin where your home town
is located and what sea does it empty into?

Find the Amazon River on a physical map of the world. Measure its length and the area of its drainage basin and compare it with the major river in your country 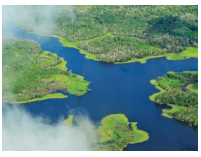