Half of the world’s population live in cities

Since time immemorial the human population of every country and geographical region in the world has divided into city and town people, on the one hand, and country people, on the other hand. Historically, cities have offered better conditions for crafts, the first factories were located in cities and they have traditionally been a safer place to live, due to being protected by walls. People living outside towns and cities have been focused on agriculture: growing crops
and raising cattle. 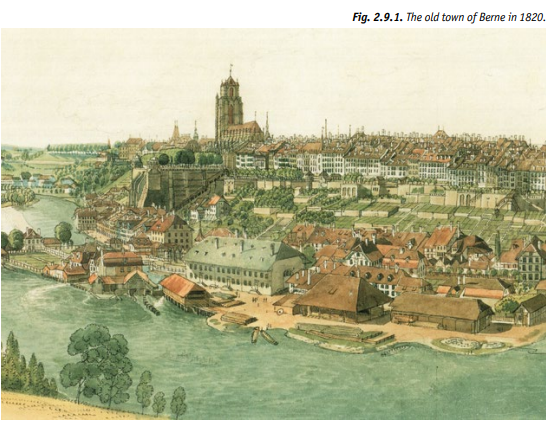 However, since the end of the 19th century there has been a major influx of population to towns and cities. This process is called urbanization.

By 2008, as a result of urbanization, the share of the world’s population living in cities rose above 50% for the first time (Fig 2.9.2). So study of the climate in cities is important for at least half of the population of our planet. 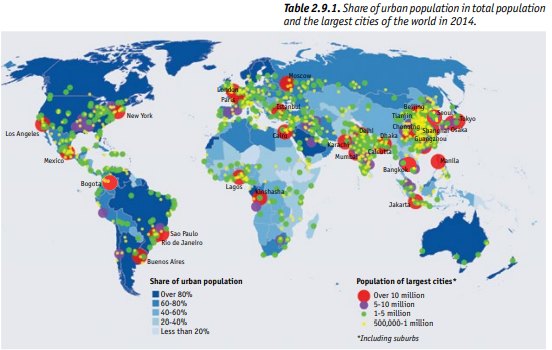 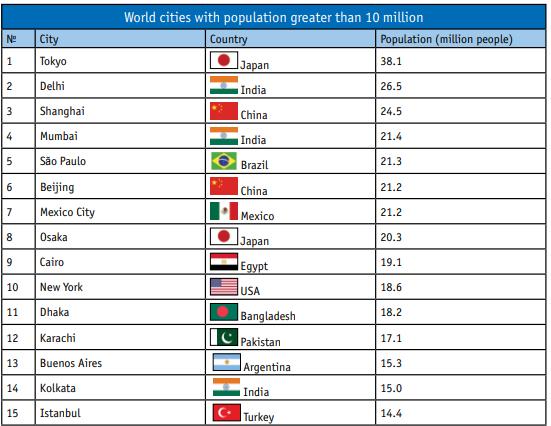 Why are cities called heat islands?

Cities are unique environmental hot spots on our planet, taking the word ‘hot’ quite literally: emissions of various substances from factories and motor vehicles ‘stagnate’ in the surface layer of the atmosphere above the city, creating a greenhouse effect, which raises the air temperature in the city by several degrees compared with the territory  around the city. Scientists therefore call cities heat islands.

The heat island effect in large metropolitan areas is being intensified by the process of climate warming.
We all know about the urban heat-island effect from personal experience: if you step out of a city building in the evening of a hot summer’s day, the temperature on the street is warm enough for a stroll in light clothing, but outside the city you would find it quite chilly outdoors in the evening without a jacket, even during the hottest summer month. This is because in an urban environment surface air cools more slowly: it is kept warm by the walls and roofs of buildings that have soaked up heat during the day. 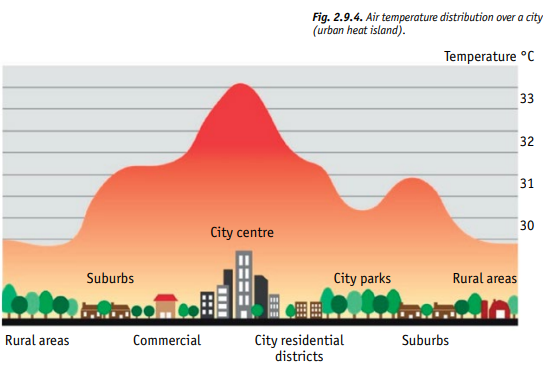 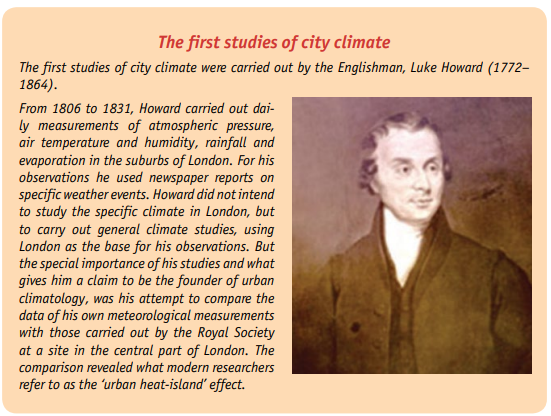 How does climate change affect the health of city dwellers?

Climate change has substantial impact on human life and health. We already knew that our health depends on safe behaviour, heredity, occupation, environment, and access to health care, but it is now becoming clear that it also depends on climate change.

Climate change is particularly noticeable in cities, and most of all in large cities. For example, the increase in air temperature in Moscow over the last century has been more than 2 °C, while the increase in global average temperatures during the same period has been only 1 °C. Air temperature are also rising quickly in other major cities around the world (Fig. 2.9.5). 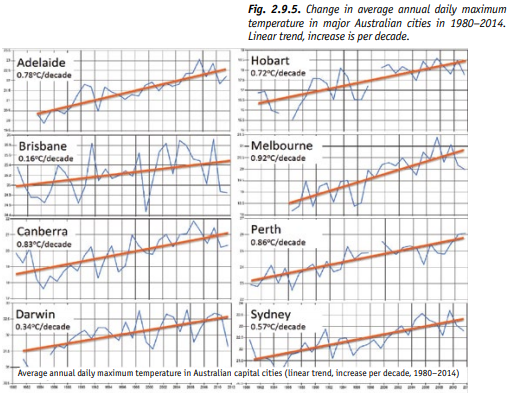 Experts of the World Health Organization expect that global warming will cause periods of extremely hot weather in cities to become more frequent, intense and long-lasting. It is wellknown that fluctuations in pressure, temperature and humidity can make living conditions in cities uncomfortable, and there are ever more instances when excessive city heat takes a tragic toll among elderly, young children and people with poor health. Intense heat is accompanied by higher concentrations of pollen and other particles that cause allergies and asthma. People who live and work in the city centre and people, whose jobs require spending much time out of doors (road workers, construction workers, etc.) are particularly at risk on hot days.

Timely forecasting of a coming heat wave is of great importance, since it gives medical personnel a chance to prepare for it. The World Meteorological Organization recommends that such a warning forecast should be given at least two days before the period of intense heat actually begins.
The USA, Canada, France and some other countries have already taken steps to address the challenges posed by the heat island effect in the context of global warming. For example, the US city of Philadelphia has advocated a system of ‘good offices’ during heat waves: the media regularly report on the changing weather conditions and offer advice on how to avoid heat-related illnesses. The number of a telephone hot line is published in the newspapers and is also displayed on a large screen with high visibility in the city centre. Emergency medical services and fire departments take on extra staff. Special air-conditioned premises are provided for elderly people, who are brought there by special, free-of-charge transport service to take a break from the heat. 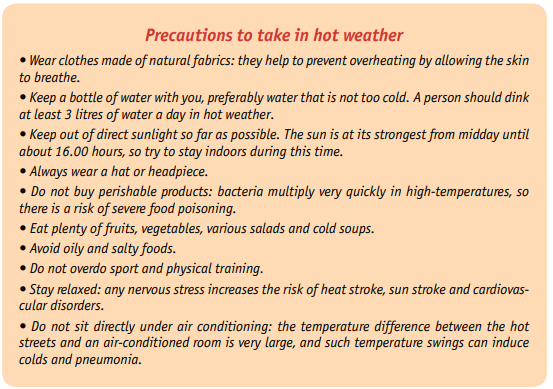 Climate change has negative impact on human health (Fig.2.9.6). Dangerous infectious diseases, such as encephalitis and malaria, spread to areas where they were not previously present, and the period of the year when there is danger of infection becomes longer. 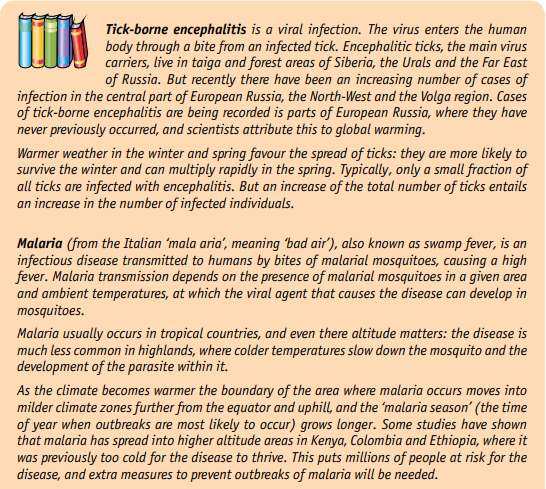 Floods also pose an indirect threat to human health, since flooding disrupts water supply and sewerage systems, which increases the risk of intestinal diseases. Also, when flooding occurs in some parts of the world, it may bring poisonous snakes and crocodiles with it, as happened during the floods that occurred in Australia in 2011.
Psychological stress and depression can also be provoked by changes in the environment and lifestyles. You have probably noticed yourself that sometimes, when the weather is bad, you don’t want to go anywhere or do anything. So how will people feel if bad weather happens increasingly often?

How does climate change affect the urban economy?

Extreme weather events can disrupt transport, electricity and water supply in cities. Flooding may inundate buildings, roads, railways, seaports and airports. Higher temperatures lead to faster deterioration of road surfaces, which need more frequent repairs. Sudden temperature drops in the winter cause the formation of ice that damages power lines, leaving homes, schools, hospitals and businesses without electricity.
Residents of northern countries may be able to reduce the cost of heating their homes as air temperature in the cold season rises. But cities in southern countries will face higher costs as there will be greater need for air conditioning in the summer.
Scientists have been studying the impact of climate change on cities in greater depth during the last decade. Such studies are essential, since correct understanding of the possible consequences of global warming will make it possible to offset some of the costs. For example, the cost of clearing up damage caused by a flood can be partly compensated by savings on heating in the winter.

1. Does more of the world’ population live in cities or outside cities?
2. Where is it warmer – in the city or in the city suburbs?
3. Why are heat islands bad for human health?
4. What are the negative impacts of global warming on human health?
5. What precautions should be taken in hot weather?

Task 1. If you take your summer holiday in the countryside, try placing a thermometer outdoors in the shade at the level of a person’s height above the ground, and write down the temperature it shows in the early morning (before the sun starts to raise the air temperature). Compare it with the forecast for night air temperatures in the nearest large city on the same day. Are the figures different? Why?

Task 2. Using textbooks, reference books and the Internet, find out and write down how you can help someone suffering from heat stroke, sunburn, frostbite, severe allergic reaction to pollen, or someone who has been bitten by a tick. What preventive measures can you take to protect your health during a period of intense heat? 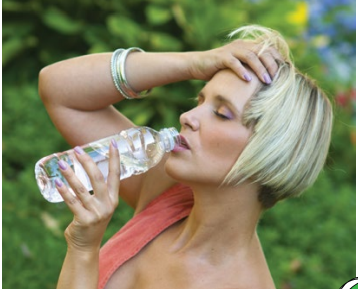