It is not hard to show that the Earth’s climate has always been changing. Of course, the heroes of cartoons and computer games about dinosaurs and the ice age are made up, but dinosaurs really did exist, as we know from finding dinosaur bones and eggs. When these animals were alive, the climate on our planet on earth was much warmer than it is now. But there were cold periods, when the climate was much colder than now, and when glaciers reached as far south as Berlin or Chicago and were as high as a multistory building!

Over the hundreds of millions of years of the Earth’s history the temperature on Earth has varied greatly – by about 10 °C (Fig. 1.3.1). That’s a lot! If temperatures today were 10 °C warmer, then the climate in Stockholm would be quite different: the average temperature during the year in the Swedish capital would be what it is now at the Mediterranean coast, for example in Barcelona or Marseille. That would be nice, you think? But then in Southern Europe, it would be as hot as in Dubai. And on the Arabian Peninsula, it would be probably too hot for people to live! 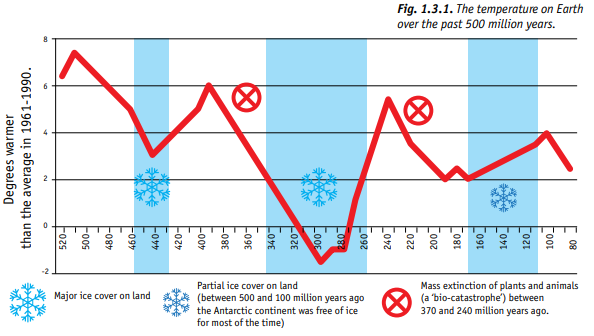 Scientists assess what the temperature on Earth was in the past by studying rocks, sediments at the bottom of lakes, seas and oceans. Ice leaves traces on rocks, while sediments from what used to be ancient seas contain the remains of plants, which could only survive at certain temperatures.
Scientists have an even better source of data to assess temperatures in the last million years: they use the ice of Antarctica. The ice contains air bubbles that give evidence of the gas composition in the atmosphere and the temperature on Earth in the past (Fig. 1.3.2). The longest data series (about 800,000 years) has been obtained at the Russian Antarctic station, Vostok.
Tree rings are a good source of information on climate change in past centuries. The rings from warm years are wider, but those from cold years are narrower. The shells of marine and freshwater mollusks are another good indicator of climate in the past. The science that deals with the study of past climate is called paleo-climatology.

Fig. 1.3.2. Scientists extract a column of Antarctic ice, from which
they will be able to determine the air temperature and carbon
dioxide content in the atmosphere over hundreds of thousands of years 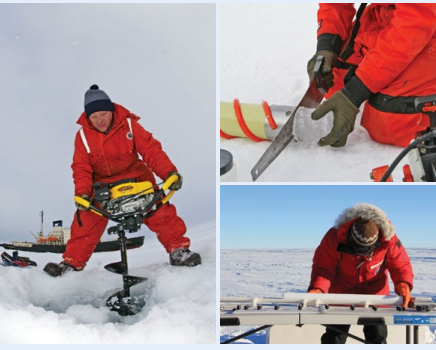