Over 50% of the world population live along sea coasts and they account for more than 70% of total world production. Many of the world’s largest cities, ports and tourist zones are located on or near sea coasts, where there is intensive economic activity.
Coastal areas are closely linked with regions that are located far inland. So impacts on coastal zones seriously affect the economy and living conditions, even in places that are far away from them.
Coastal zones are highly vulnerable to the effects of climate change. The main threat to them is from rising sea levels, more intense storms that cause flooding and shore erosion, and an increase in the frequency of extreme weather events.
The rising level of the world ocean
The level of the world ocean has been rising steadily for over 100 years. It rose by 17 cm in the course of the 20th century. That may not seem much, but it presents a real danger for countries where the level of the land is not much above the sea level (or even below it). Global climate change is one of the main causes of this process.
The Intergovernmental Panel on Climate Change says that the rise in the level of the world ocean since the middle of the 19th century has been faster than the average in the previous 2000 years. In the last 100 years sea levels have been rising at an increasing rate. While levels rose by 1.7 mm per year between 1901 and 2010 (i.e. 17 cm over the century), the increase between 1971 and 2010 was 2.0 mm per year, and between 1993 and 2010 it was 3.2 mm.
There are two causes of rising sea levels:
1) The melting of glaciers in Greenland and Antarctica, which pours extra water into the world ocean.
2) Thermal expansion of water. As temperatures increase, water expands and takes up more space.
In forecasting climate change scientists use sophisticated mathematical models, which take account of the variety of factors that lead to climate change. Of course, these models cannot predict precisely by how many centimetres sea levels will rise in the next 30, 50 or 100 years. But the range of future increase can be established.

In its fifth assessment report the Intergovernmental Panel on Climate Change writes that, in various scenarios, the level of the world ocean will rise by between 17 and 38 cm in the period up to 2050 and by between 26 and 82 cm by the year 2100. On average the rise of sea levels by the end of this century will be between 40 and 63 cm, which represents a serious threat to coastal zones, particularly small coral islands and the low-lying Pacific coast of South-East Asia. A rise of the sea level will be uneven, and is expected to be much greater in the tropics,
where the 22nd century could see rises of 1–3 m, followed by an increase of 5–10 m from current levels in the next century.
Will coastal regions be swallowed up by the sea?
Coastal plains will be flooded as a result of rising sea levels, coastlines will be gradually swallowed by the sea, and fresh water supplies to coastal areas may break down. These are serious threats for such densely populated coastal countries as Bangladesh, Nigeria and Indonesia. Several major cities are at risk from rising seas levels, including Shanghai, Bangkok, Mumbai, Jakarta, Buenos Aires, Rio de Janeiro, Miami and New Orleans. 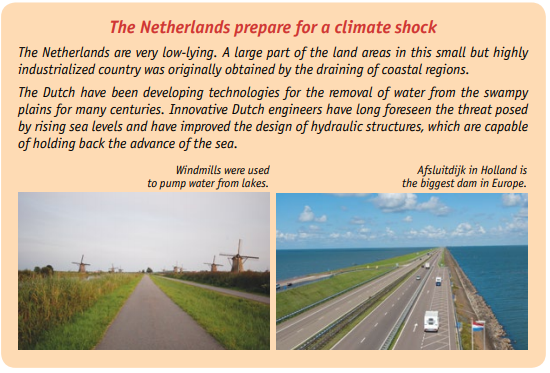 A rise of sea levels by 1 m will flood up to 15% of arable land in Egypt and 14% of arable lands in Bangladesh forcing millions of people to resettle. Salt sea water may infiltrate coastal groundwater, which is the main source of fresh water in many parts of the world.
Forecasts suggest that even a sea-level rise of 0.5 m will lead to the flooding of about 40,000 km2 of fertile plains in China. Low-lying plains and the lower reaches of major rivers (the Yellow River, Yangtze River, etc.) will be particularly vulnerable. The average population density along such rivers in China is sometimes as high as 800 people per km2.
In the world there are 41 small island states and in many of them the land mass rises only a few dozen centimetres above sea level. These islands could get completely covered by the rising ocean, and their inhabitants will be forced to seek refuge in other countries. 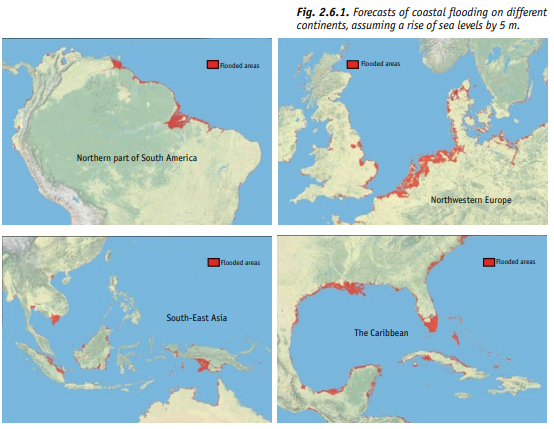 Storm warning
Storms have recently become more frequent in coastal areas and at sea. Extreme storm winds, whether near the coast or in the open sea, cause ‘storm surges’ – a sudden rise in water levels in water bodies that are semi-open to the sea (bays, the lower reaches of rivers). Storm surges attack coastal regions and are often accompanied by extreme precipitation and flooding, threatening the movement of ships, work on oil and gas platforms and seaside tourism, as well as causing coastal erosion. 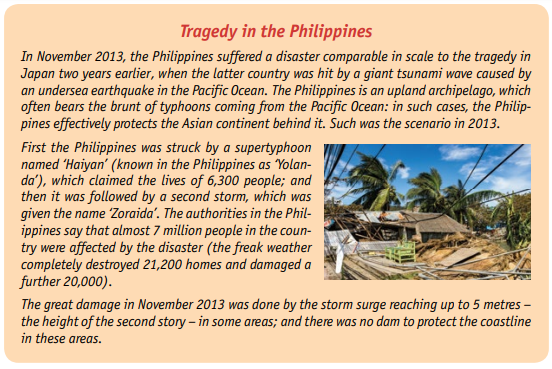 Erosion and destruction of coastline
Erosion and destruction of coastline by the sea is another consequence of rising sea levels (Fig. 2.6.3–2.6.5). Erosion is a particularly serious problem along Arctic coastline, which was previously protected by ice, but is now losing ground rapidly as the ice cover has lessened and storm weather has become more frequent. The coast in the Arctic is retreating by as much as 10–25 m or more each year in some places. 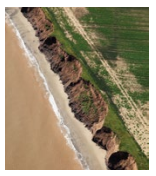 Of course, the erosion of sea coasts by waves and floods is not something new. If you look at a map of island archipelagos that was made over 100 years ago, you will see that many of the islands, which it shows, no longer exist (Fig. 2.6.4). This process is now advancing more quickly. Light-beacons that were originally built at a safe distance from the cliff- edge are falling into the sea (Fig. 2.6.5), quite large human settlements are being engulfed and their inhabitants have to be resettled, and roads need to be diverted. 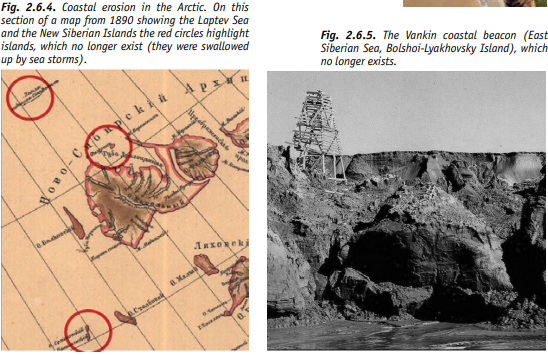 In Alaska, the entire village of Kivaluna, where 400 people lived on a narrow strip of land beside the Arctic Ocean, had to be abandoned and its inhabitants relocated away from the coastline. The cost of the operation was more than 200 million US dollars, although the village was not large (about 70 houses).

Risk to coastal ecosystems
As well as its impact on people and the economy, the rise of sea levels also affects both sea and land ecosystems along the coast. The ecosystems of coastal lowlands are particularly vulnerable, since their level is typically only a few centimetres above that of the sea. Such lowlands are the habitat of many species of animals and plants, and they play a key role in the accumulation of nutrients. These ecosystems include salt marshes, which are flooded with sea water at high tide. Mangrove forests, which are commonly found in coastal lowlands that have a humid tropical climate, are also threatened by rising sea levels.

Global warming poses a significant threat to coral reefs, since the rise of water temperatures above a certain limit will lead to bleaching of the coral. Bleaching means that corals lose the symbiotic algae normally found in their tissues and become white as a result of stress. If bleaching is severe or prolonged, they can die. Such coral bleaching is already being observed in many places. 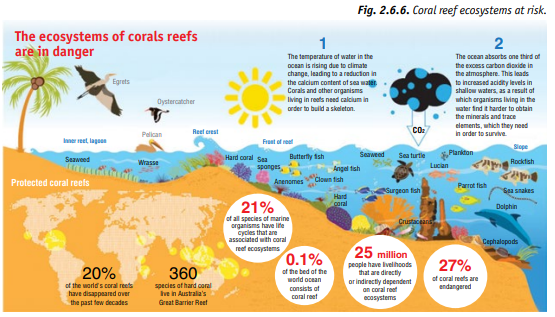 A long-term increase in the temperature of sea water may lead to major degradation of the whole coral reef ecosystem. Coral atolls, which serve as a habitat for a great number of living organisms, may be destroyed. Forecasts by the Intergovernmental Panel on Climate Change suggest that 18% of the world’s coral reefs will be lost in the next three decades due to the impact of a variety of factors.
Climate change and fisheries
Scientists and fishermen are concerned by the increase in temperature and acidity of ocean water. As concentrations of CO2 in the atmosphere increase, absorption of CO2 by the ocean is also increasing, which increases levels of acidity (pH). Changes in pH and water temperature have not been great as yet, but they have been sufficient to cause coral bleaching. By the middle of the present century acidity may increase by 0.06–0.34 pH, which is 100 times faster than the rate of change which has occurred in at least the last 20 million years. Many marine organisms
will find it hard to adapt to the new conditions, and this will have serious impact on fish diversity and productivity. 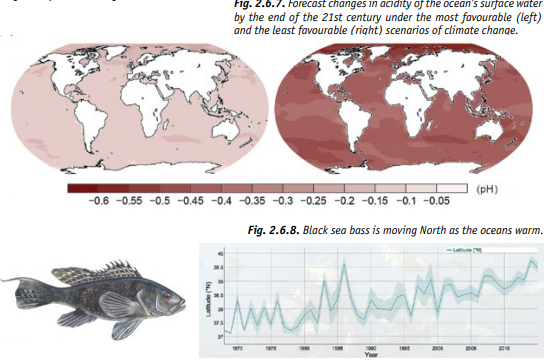 Changes in the properties of sea water are already leading to massive displacement of marine and freshwater fish species and the direction of their movements is not chaotic, but purposeful. Warm-water fish are moving to higher, cooler latitudes. This is not due directly to the increase in water temperature, but to reduction in the amounts of phytoplankton, which is the staple diet of ocean fish, as the water temperature rises.

It has been noted that numbers of cod off the coast of Greenland, and also of herring and Japanese and Adriatic sardines increase during periods of climate warming and are much reduced during cold periods.
Many fish species are currently being fished at the limits of capacity to restore their populations, and there is concern that additional pressure from the need to adapt to climate change may push some species beyond their ability to reproduce in sufficient numbers to survive.
The loss of coastal habitats, including coral reefs and mangroves, is another major factor threatening fish productivity.
The World Food Organization notes that fish represent more than 15% of average protein intake for over 2.9 billion people. In small island states and some developing countries (Bangladesh, Cambodia, Equatorial Guinea, French Guiana, Gambia, Ghana, Indonesia and Sierra Leone) fish provide more than 50% of animal protein intake. The populations of these countries are dependent on fisheries, so that any reduction in local catches represents a serious problem. 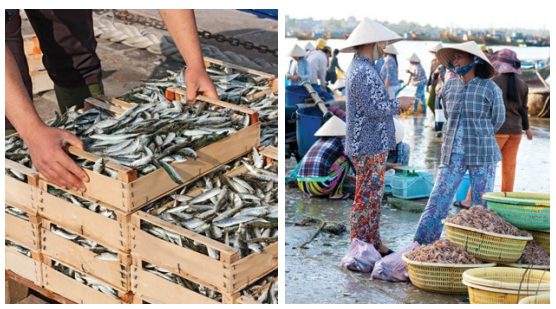 1. Which country, Switzerland or the Netherlands,
will suffer most if sea levels rise by more than half a metre?
2. Why are sea coasts being eroded more rapidly?
3. What happened to lost islands?
4. Give examples of the impact of climate change on coastal
ecosystems.
5. Why are some fish species moving to northerly latitudes?

Task 1. Locate the Republic of the Maldives and Tuvalu on a physical map of the world. Find their height above sea level and explain why a rise in the level of the world ocean is so dangerous for them. Find island countries and coastal countries on various continents, which are also in danger of being fully or partially submerged by the sea in the next 50-100 years. Suggest ways of addressing the problem.

Task 2. Show on a contour map how the appearance of the continent of South America would change if sea levels rose by 100 m: use coloured pencils to colour areas of land that would disappear under the sea. Think of geographical names for these areas. What will happen to the animals and plants there: will they perish? Write down your suggestions in an exercise book.

Task 3. Using OCEANADAPT webtool (http://oceanadapt.rutgers. edu/), find out how different fish species in the USA have changed their usual habitat in the past 40–50 years. Which species had to move the most? Why are these movements happening? 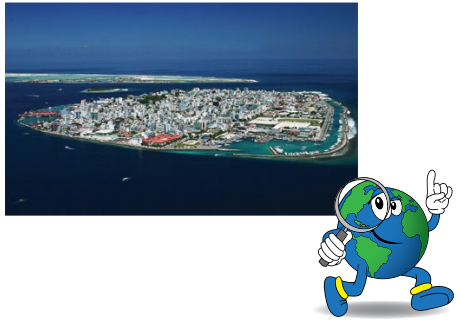