There have been many examples of the use of energy-efficient technologies in buildings around the world and, more recently, people have started implementing larger projects at the city level.
One ambitious objective is the creation of environmentally friendly cities. Imagine a whole city designed in harmony with the environment where the inhabitants only consume resources, which they really need, and do everything they can to protect the natural world. All of the energy in the city is produced using renewable energy sources. Waste is recycled and reused. People in this city fully understand the importance of caring for the planet and for each other,
and therefore live in peace and harmony.
More and more of the world’s population want these dreams to come true, so the design of green cities is being given every greater thought. Such cities have clean air and clean water. Waste and wastewater are recycled and re-used. Rooftops are used for gardens or solar panels and have tanks to collect rainwater. Active- and passive-house technologies are used in the construction of residential, public and commercial buildings.
It is impossible to make all cities environmentally friendly straight away, but these dreams are becoming a reality little by little all over the world. 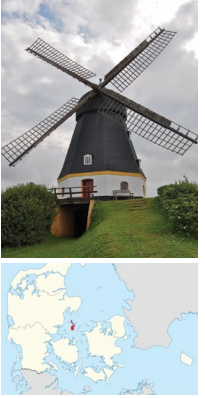 Sams (Denmark)
The inhabitants of the Danish island of Sams are self-sufficient in energy from renewable sources and even sell some of the energy, which they generate. This result took 10 years and investments of 80 million US dollars, but the money has already been repaid from electricity sales.
The islanders built 10 wind turbines on land and 11 at sea, which produce 28 gigawatt-hours of energy each year in total.
Heating on the island comes from renewable biomass: straw, sawdust and other plant waste is burned in boiler plants.
The island has an area of 114 km2 , stretching about 50 km from north to south and with breadth of more than 20 km at its widest part. There are 4,000 inhabitants, most of them engaged in agriculture. The largest settlement, Tranebjerg, has a population of only 800 people, but proudly calls itself a town. 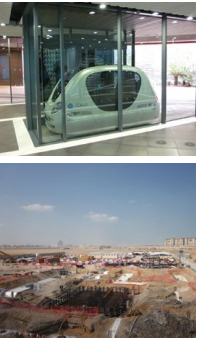 The idea of building a green city in the desert was put forward by the government of Abu Dhabi. The project with a total budget of 22 billion US dollars was launched in 2006 and is due for completion in the near future. The new city is expected to have a population of 45,000-50,000 people and about 60,000 more will commute to work in Masdar every day. Most of the companies and industrial plants there will specialize in the development and production of environmentally friendly technologies and products. Vehicle transport is not permitted in Masdar City: residents will move around on foot, by bicycle, by public transport or using new, computer-controlled taxis. A high wall is being built around the city to protect it from the hot desert
wind, and its streets will have abundant shade.
Masdar city is designed to be a hub for clean technology companies. The Masdar Institute of Science and Technology has been operating in the city since September 2010. The city also hosts the headquarters of the International Renewable Energy Agency (IRENA). 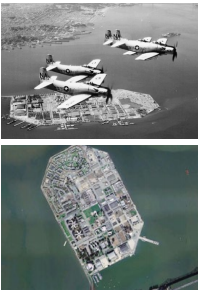 Treasure Island (San Francisco, California,
USA)
Treasure Island is an artificial island created in California in 1939 as the site for a new airport. These plans were changed with the coming of the World War II, and the island was instead used as a military base, which remained there until 1996. Now Treasure Island is being used as a testing site for green construction. It is expected that 13,500 people will live there, and they will produce their electricity using solar panels, which will be installed on 70% of all the roofs of buildings by 2020, providing up to 30 gigawatt-hours of electricity each year. Electricity will also be generated using wind power. Citizens will be able to buy fruits and vegetables from an organic farm on the island, all cars will be eco-friendly and buildings will be energy efficient. Buildings on the island are certified under the LEED energy efficiency standard

Sherford (England)
Sherford in England is a new eco-friendly town, designed in traditional English style. The project is scheduled for completion by 2020 and has the support of Prince Charles. All of Sherford’s buildings will be made from environmentally friendly materials, produced in England and not more than 80 km from the construction site. This will reduce the carbon footprint from construction work, as it will not be necessary to transport materials over long distances, emitting greenhouse gases from the combustion of vehicle fuels. Sherford will be laid out in a way that makes it easy to move by foot and on bicycles easily and quickly, so that the inhabitants will have no need for motor transport in some parts of the town. Space on rooftops will also be used for solar panels and for growing plants. 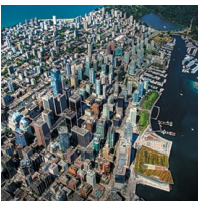 The City of Vancouver (Canada)
The City of Vancouver (Canada) is known as one of the most environmentally friendly cities in North America. As a next step, the city has adopted an ambitious plan to become the greenest city in the world. The plan, which was developed by the city
authorities in collaboration with local people, includes such measures as a shift toward 100% renewable energy power by 2050, zero waste program, expanding walking and cycling network, developing green buildings and public transportation, expanding green areas, as well as increasing farmers markets and community gardens. Moreover, the city administration has established a two million US dollar
Greenest City Fund in collaboration with The Vancouver Foundation to support community-led projects to green Vancouver. With all these measures fully implemented, the City of Vancouver aims to reduce community-based greenhouse gas emissions by 80% below 2007 levels by 2050.

1. What time of day is the peak of electricity consumption?
2. Do you think that hot countries need to worry about saving energy?
3. How does a city need to be designed if it wants to be a ‘green’ city?
4. Where do you think your home loses most of its heat in winter and coolness in summer? How could this be avoided?
5. What is the difference between ‘passive’, ‘active’ and ‘smart’ buildings?

Task 1. Ask your parents to let you see the electricity bills for your house or apartment for the past year, write down how many kilowatt-hours were used and build a graph. Find out how much electricity is used by your main household appliances: refrigerator, washing machine, vacuum cleaner, TV, lights, etc. You can do this by: 1) finding the power of each device in the technical information that came with it; 2) calculating roughly how many hours a day the device operates; 3) multiplying that time by the number of days in a month; 4) multiplying the power of the device by the time it operates.
Draw a second graph on the same piece of paper, summarizing total power consumption by your domestic appliances. Analyze the graph, see which appliances use more power and think why that is. Together with your parents, think what you can do to reduce energy consumption.

Task 2. Draw a large map of an environmentally friendly city where you would want to live. What will it be called? Where in the world will it be? How will its streets be laid out? Will motor vehicles be allowed to drive around the city? What companies and industries will it have (if any)? Where will the residential district be located and why will it be located there? Draw what your own home in this city will look like. What sort of a building will it be and what will it be made from? Write an essay about this.

Task 3. Find out about the environmental initiatives in various cities around the world from the ‘Sustainable Cities’ page in Wikipedia and other online resources. Find detailed information about the current status of any ecological city and give a report about this city in school.