Different parts of the Globe have different climates. In northern countries, when people look
out of the window during winter and see snow everywhere, they are keen to go on holidays
to tropical countries, where one can enjoy hot weather and swim in the warm sea all year round.
Since ancient times, scientists have divided Earth into

climate zones depending on the height of the sun above the horizon and the length of the day. The word ‘climate’ comes from the Greek language in which it refers to the angle of inclination of the sun. Differences in the climate
on our planet are primarily due to the fact that the sun’s heat is distributed unevenly over the Earth’s surface. Nearness of the sea, atmospheric circulation, patterns of precipitation and other so-called ‘climate-forming factors’ also have a major role in determining climate, and they, in turn, depend much on geographical latitude and on height above sea level. Areas with similar climates are like broad stripes encircling the Globe. They are what the scientists call ‘climate zones’ and they give way to each other further away from the equator towards the poles (Fig. 1.2.1). 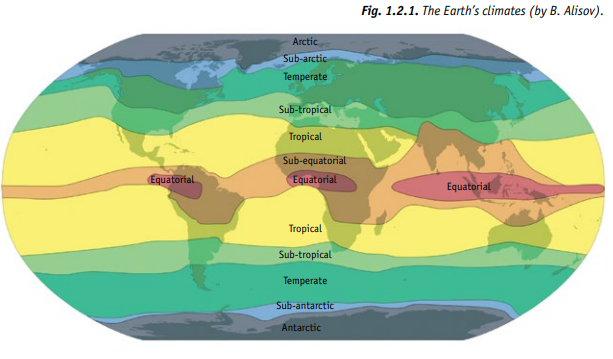 The most well-known classification of climates was introduced by a German Russian climatologist Wladimir K ppen in 1884 (Fig. 1.1.1). He divided the climates into five main types: A – Tropical, B – Dry, C – Temperate, D – Continental, E – Polar and Alpine. Another system of climate classification, which commonly used in Eastern Europe, was created in 1950s by the Russian scientist Boris Alisov (Fig. 1.2.1). This classification distinguishes four main climate zones in each hemisphere of the Earth as well as three transitional zones.

The air masses in transitional climate zones change with the seasons, entering them from neighbouring zones at various times of the year. For example, in a sub-tropical climate the summer is hot, like in the tropics, but the winter is cool, since the tropical air mass is displaced by an air mass from the temperate zone. 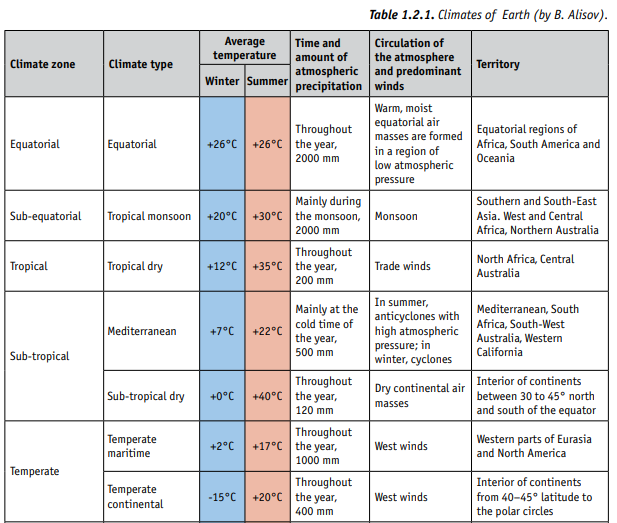 A brief description of different climates

An equatorial climate is marked by hot and moist 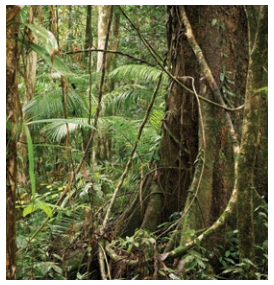 equatorial air masses. Air temperature is constant (+24–28 °C) and there is much rain throughout the year (from 1500 to 5000 mm). Rain falls faster than water can evaporate from the ground, so the soil in an equatorial climate is waterlogged and covered by a dense and high rainforest. An equatorial climate is found in northern parts of South America, the coast of the Gulf of Guinea, in the Congo river basin and the headwaters of the  Nile in Africa, over the greater part of the Indonesian archipelago and the adjacent parts of the Indian and Pacific Oceans in Asia.

A sub-equatorial climate is marked by a rainy season 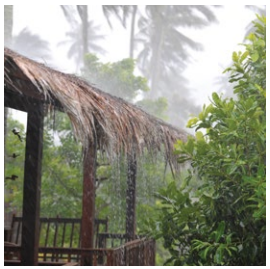 in the summer, followed by a cool and dry season in the winter. Rainfall in a sub-equatorial climate is very uneven through the year. For example, in the city of Conakry (the capital of Guinea), there is just 15 mm of rain in December-March, but 3920 mm from June to September. This type of climate is found in some parts of the Indian Ocean, the western Pacific Ocean, as well as in South Asia and tropical regions of Africa and South America. 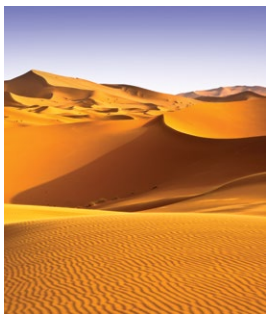 with high pressure, giving clear weather nearly all the year round. There are two seasons: warm and cold. Temperatures can vary from +20 °C on the coast to +50 °C in the interior. The temperature can also vary greatly within a single day: on a summer afternoon the air heats up to +40–45 °C, but it cools down at night to +10–15 °C. Deserts are often found in tropical climates, and the largest of them is the Sahara Desert in Africa. Deciduous forests (forests that lose their leaves in the winter) and savannas are common in wetter regions. Mexico, North and South Africa, Central Australia and the Arabian Peninsula have a tropical climate. 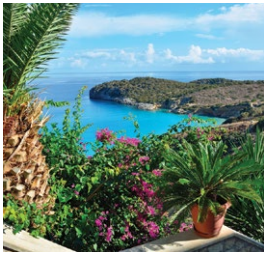 A sub-tropical climate is found in regions between tropical and temperate latitudes, from about 30 to 45 degrees north and south of the equator. These regions are marked by hot, tropical summers and fairly cool winters. The average monthly temperature in summer is above +22 °C and in winter above -3 °C, but the arrival of air from polar regions in winter time may cause temperatures to drop as low as -10 to -15 °C, and occasionally even as far as -25 °C. This type of climate is typical for the Mediterranean, South Africa, Southwestern Australia and Northwestern California. 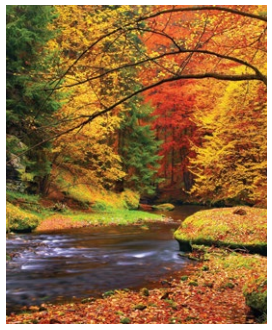 Temperate climate
A temperate climate is found in so-called temperate latitudes (from 40–45 degrees north and south of the equator as far as the polar circles). In the Northern Hemisphere more than half of the temperate zone is occupied by land rather than sea. But 98% of the temperate zone in the Southern Hemisphere consists of ocean. A temperate climate is marked by frequent and severe weather changes due to cyclones. The main feature of a  temperate climate is the division of the year into four seasons, of which one is cold (winter), one is warm (summer) and the other two (spring and autumn) are transitional. The average temperature in the coldest month is usually below 0 °C, and in the warmest month it is above +15 °C. The ground is covered by snow in the winter. Prevailing westerly winds bring
rain and snow throughout the year, with rainfall and snowfall varying from 1,000 mm in coastal areas to 100 mm deep inland.

Sub-polar (sub-arctic, sub-antarctic)
A sub-arctic climate is found between Arctic 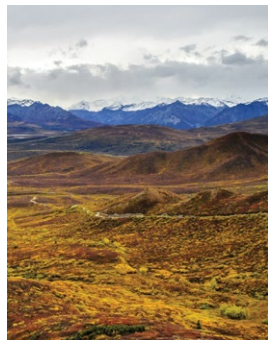 temperate climate zones in the Northern Hemisphere. This climate is marked by air masses at moderate temperature in the summer and cold air masses from the Arctic in the winter. The summers are short and chilly, with air temperature in July rarely above +15 °C by day and dropping to between 0 and + 3 °C at night, and a chance of frosty nights through the summer. In winter the temperature by day and night is -35–45 °C. The landscape in a sub-arctic climate consists of tundra and forest tundra, the soil is marked by permafrost, and there are few plants and animals. The north of Russia and Canada, Alaska (USA), South Greenland and the far
north of Europe have a sub-arctic climate. A sub-antarctic climate is found in the Southern Hemisphere between the temperate and Antarctic zones. The greater part of the sub-antarctic zone consists of ocean. Annual rain and snowfall in these regions is up to 500 mm. 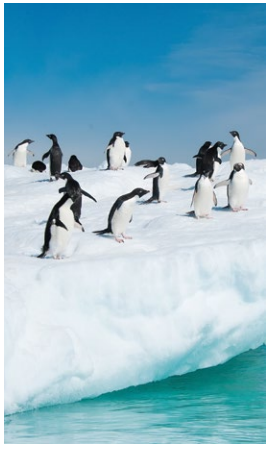 A polar climate is found to the north of 70 degrees latitude in the Northern Hemisphere (Arctic climate) and to the south of 65 degrees latitude in the Southern Hemisphere (Antarctic climate). Polar air masses are dominant all the year round. The sun does not appear above the horizon for several  months (this period is called the ‘polar night’) and during some other months it does not set beyond the horizon (‘midnight sun’ or ‘polar day’). Snow and ice reflect more heat than they absorb, so the air is very cold and the snow never melts. Atmospheric pressure is high all the year round (anticyclone), so winds are weak and there are almost no clouds. There is very little snowfall, the air is full of small icy needles and a water haze often occurs in the summer. The average temperature in summer is below 0 °C, and in winter it is between -20 and -40 °C.

Where are the coldest and hottest places on Earth?