During the last century, the temperature on Earth began to rise in a strange way. In 100 years the planet became nearly one degree warmer! In the Northern Hemisphere the period from 1983 to 2017 has been the warmest in the last 1,400 years (Fig.1.4.1). 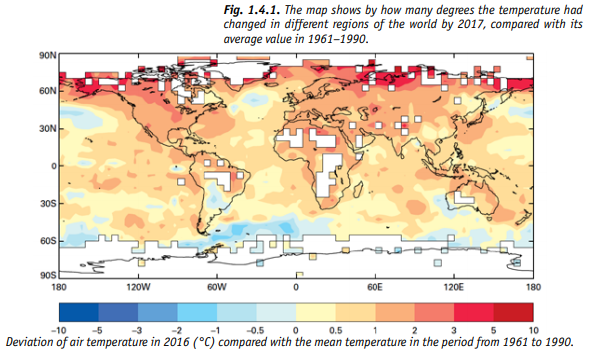 Scientists explain the current warming of the planet by an increase of what is called the ‘greenhouse effect’. 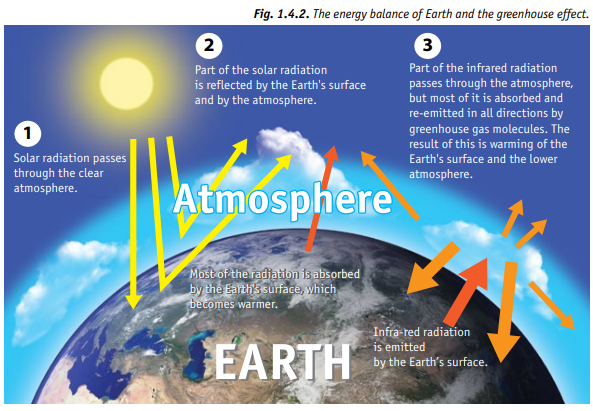 The greenhouse effect
The greenhouse effect is the process by which gases, dust and water vapour in the atmosphere absorb the Earth’s heat and hinder its reflection from the surface of the Earth. When scientists first described this effect 200 years ago, they noted how the Earth’s atmosphere acts like a greenhouse for growing vegetables. So the gases that absorb the Earth’s thermal radiation were called ‘greenhouse gases’. The greenhouse gases in the atmosphere are carbon dioxide, methane (for convenience, we will refer to them by their chemical formulas, CO2 and CH4) and some others, as well as water vapour. They create an obstacle to infrared radiation from the Earth’s surface. As a result the lower atmosphere warms up. Without the greenhouse effect, the average air temperature on the Earth’s surface would not be +14 °C, as now, but -19 °C. The heat of the Earth would depart into space without warming the atmosphere. This would make it hard for life to exist on our planet.
Scientists have long predicted that by producing and burning coal, oil and gas, human beings would emit large amounts of CO2 and CH4, increasing the greenhouse effect. In the mid-20th century, the prediction was confirmed: the concentration of these gases all over the world began to increase rapidly (Fig. 1.4.3). 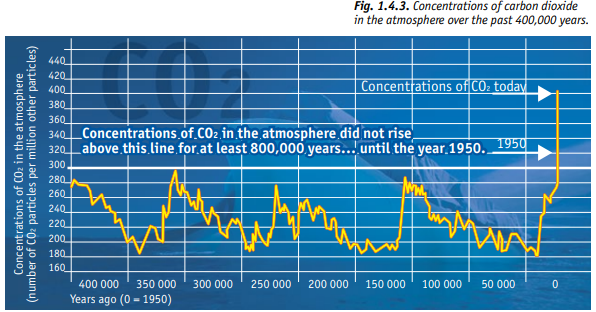 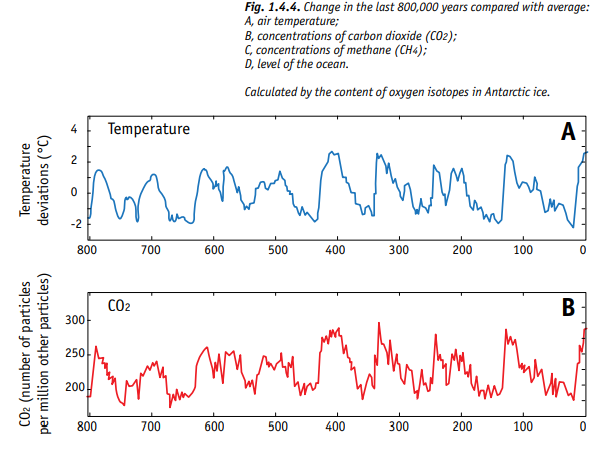 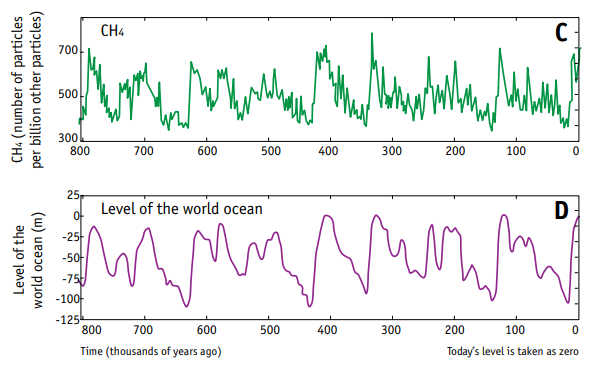 The level of the oceans, shown in the bottom graph, has changed at the same time as temperature and concentration of greenhouse gases. During cold periods sea level was 50–100 m lower than it is now, and in warm periods in the last 100,000 years, it was 5–10 m higher.

Is the increase in concentrations of CO2 due only to human activity or is it a natural process? Every year, photosynthesis and respiration by living organisms produce amounts of carbon dioxide, which are many times greater than emissions by mankind (Fig. 1.4.5). Eruptions by volcanoes and the ‘breath’ of the ocean also play a part… But it has been shown using isotope analysis that the main cause of the greenhouse effect is nevertheless human activity. This can be established because molecules of carbon dioxide formed by the combustion of coal, oil and natural gas differ from the carbon dioxide molecules which are emitted by respiration of living organisms. 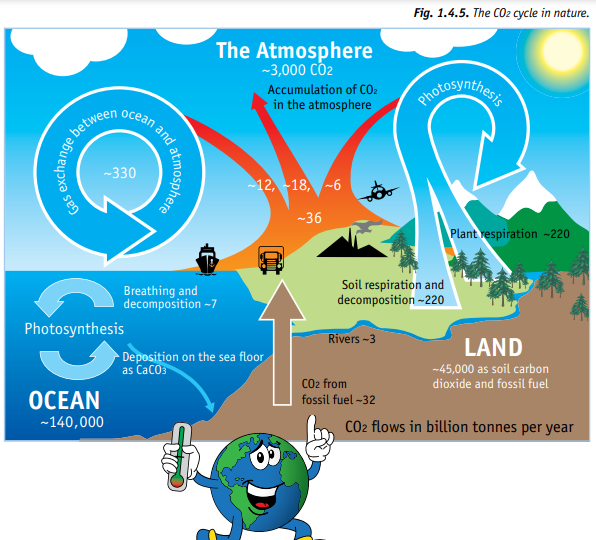 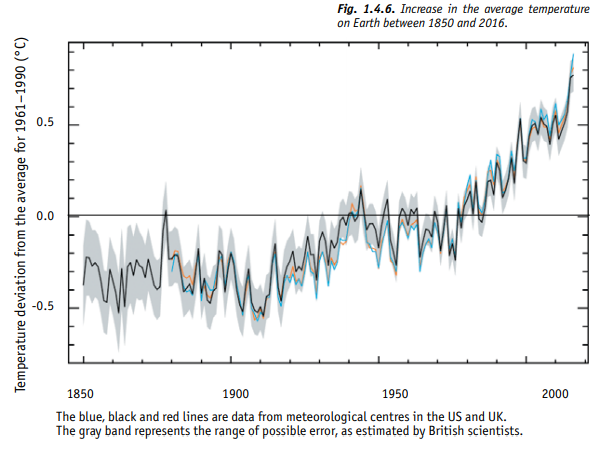 The ocean, forests and soils of our planet ‘help’ mankind by absorbing half of all manmade CO2, but the other half accumulates in the atmosphere (Fig. 1.4.5) and increases the greenhouse effect. This causes the atmosphere and then the ocean to warm up (Fig. 1.4.7). Another important point to remember is that people have cut down a large share of the world’s forests, so their ability to absorb CO2 from the atmosphere is now less than it was in the past. 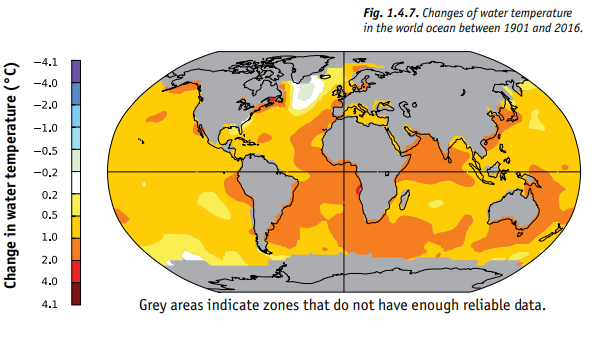 The ocean plays the most important role of all in shaping the Earth’s climate. It contains more than 90% of the energy of the planet’s climate system. If the temperature of the atmosphere was rising, but not that of the ocean, there would be much less cause for alarm. This would mean that the main link in the climate system remained affected. Unfortunately, the temperature of the world ocean is also rising year by year. So climatologists believe that cold winters or even a cooling of the air all over the planet could not signal a halt to global warming, because the
amount of heat in the Earth’s climate system as a whole continues to increase year by year, with most of the increase occurring in the ocean (Fig. 1.4.7).
In addition to changing the gas composition of the atmosphere, people pollute the air with aerosols, which consist of tiny particles. Pollution of the atmosphere is also caused by the various substances produced by emissions from power stations, cars and airplanes, forest fires and burning grass. Particles in the air obstruct the passage of sunlight, raising the air temperature near the surface of Earth. When they settle on snow and ice, aerosol particles (especially
particles of soot) reduce the ability of the surface to reflect the sun’s rays, which adds to the warming effect. So mankind both warms and cools the planet, but the impact of its actions towards global warming (by strengthening the greenhouse effect) is about three times greater than the cooling effect of human activity. Therefore, there is every reason to speak of ‘global warming’ caused by mankind.
As early as the 1970s the climatologist Mikhail Budyko carried out accurate forecasting of climate change and predicted that mankind would face problems by 2000 in the form of new and ‘strange’ changes in climate. He was right. 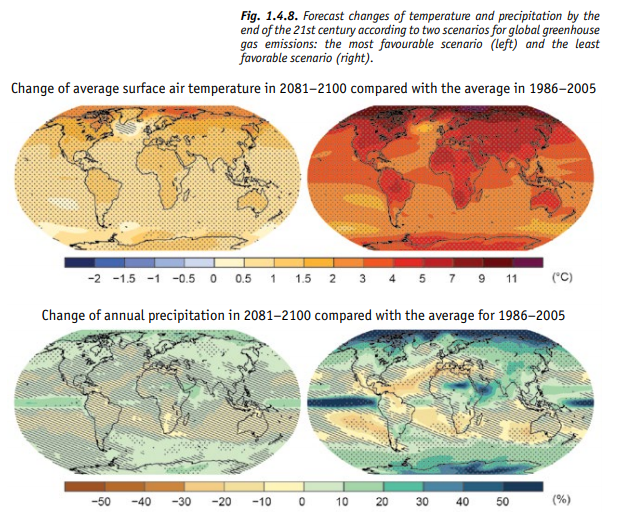 Since the time when people began to burn coal, the air temperature on the Earth’s surface has risen by 1 °C, and 0.75 °C of that growth has occurred in the last 50 years (Fig. 1.4.6). At first glance, the change seems modest and does not seem to pose a threat. But we must remember that this is the average change for the whole planet and for all seasons of the year. The change in certain places has been much greater. Air temperatures in Russia have risen by 1.5 °C and in the Far North, in the Arctic, by as much as 2–3 °C (Fig. 1.4.1).
In some parts of Russia winters have become colder and not warmer. Looking at weeks and months, we find that the temperature might be 10 °C warmer for 2–3 weeks and then 9 °C colder than the average for that time of year in that region in the second half of the twentieth century, with an overall warming of 1–2 °C. What is most striking is not the overall change, but the fact that the weather has become much more changeable, with storm winds and heavy rainfall or snowfall.
Didn’t the weather behave strangely in the past as well? Certainly, it did. Alexander Pushkin, the famous Russian poet, wrote in his masterpiece, Eugene Onegin:
‘That year, the autumn lingered,
In yards and fields, loath to go.
Nature waited, icy-fingered
Winter stalled its fall of snow
Till January the third, at night…’
Pushkin uses Russia’s ‘Old Style’ Julian calendar, so his January 3 is our December 20. But that is still very late for the first snow in the central part of European Russia – usually it starts snowing already at the end of October. 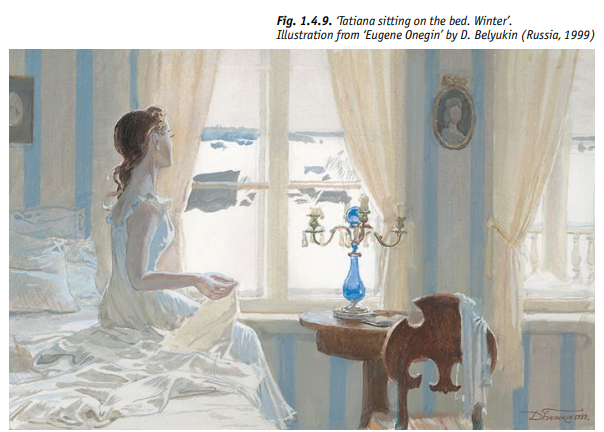 In the 19th century too, there were warm days in the wintertime and cold spells in summer, storms and floods, heavy snowfalls and droughts, and even frozen rain, which covers everything with a thick crust of ice. The key point is that such dangerous natural phenomena are now happening more often, and they will become even more frequent in the future. We will continue to experience periods of very cold weather, although, over time, they are likely to become less common. There will be some positive effects from global warming, but at present we see more negative effects.

Using computer models that take account of all the effects (both natural and human-induced), climatologists are able not only to explain what is happening now, but also to give a forecast for the whole of the 21st century. Depending on the level of greenhouse gas emissions, the temperature on Earth could rise dramatically during the current century. On a favourable scenario, the changes will be quite modest (1.5–2.0 °C) compared to the beginning of the 20th century. But in the worst case the climate on Earth could become 5.0 °C warmer. Northern Europe will warm more rapidly, and the temperature increase in the Arctic could be as great as 10 °C! This will have a major impact on levels of precipitation, the sea level, the frequency and severity of extreme weather events. How the 21st century ends will depend to a great extent on human activity.

Of course, the influence of the sun, volcanoes, ocean currents and other natural processes is also very significant. But the climate changes which they cause are of short duration and their role over long periods of time is small. So most scientists agree that mankind has most probably played the biggest role in the climate change which has been taking place on Earth for the last 60 years (since the mid-20th century) and which will continue in the coming century. 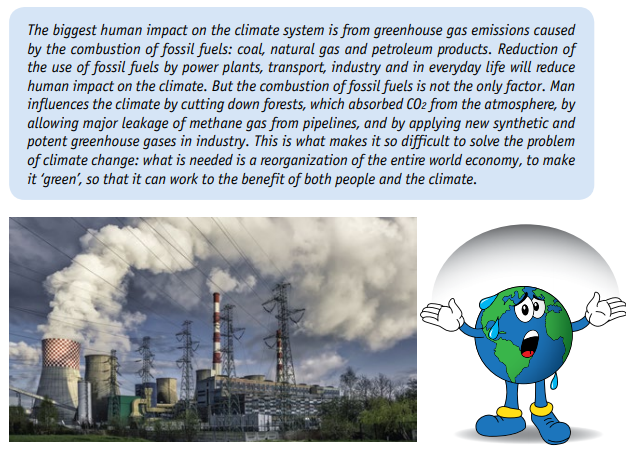