People have always used energy. Scientists began to think about this process as long ago as ancient times, when they began to study the simplest form of energy – mechanical energy, which they called a ‘living force’. Gradually, other forms of energy were discovered: electrical, electromagnetic, thermal and nuclear. Discovering new forms of energy, people investigate where it comes from and find ways to make use of it.
In our daily life we use a huge number of devices. TVs, computers and refrigerators all work thanks to electricity, which is channeled into our homes and is the kind of energy we are most familiar with. Where does it come from?
People learnt to make electricity by transforming types of energy, which they found in nature. Natural sources of energy on our planet are usually subdivided into two major groups: nonrenewable (or traditional) and renewable (or alternative) (Fig.3.1.2). 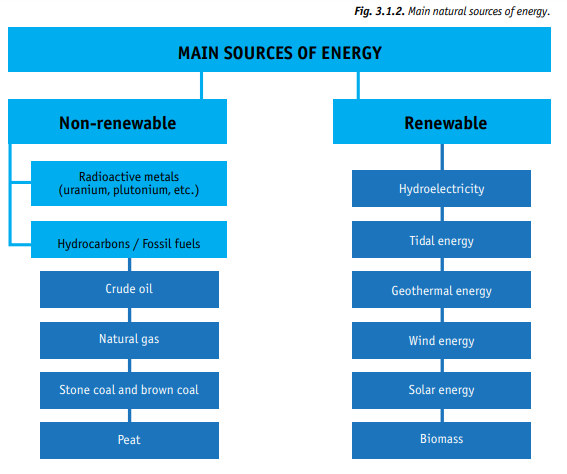 Non-renewable sources of energy are produced or replaced in nature much more slowly than they are consumed by mankind. The main non-renewable sources are coal, oil, natural gas and peat, and they are also called ‘hydrocarbons’ or ‘fossil fuels’. Non-renewable energy sources also include radioactive metals (uranium, plutonium, and others), which are used to generate nuclear power.

Renewable energy sources draw energy from processes that occur continuously in nature. Sunlight, wind, flowing water, rain, tides and heat rising from the earth can provide huge amounts of energy. What is more, these resources are practically inexhaustible: they will only run out in the unthinkably distant future when our solar system itself completes its life cycle. Biomass (plant fibre, animal waste, and charcoal derived from wood, which was widely used in the past) is also a renewable source of energy, as it is quickly replaced in nature.