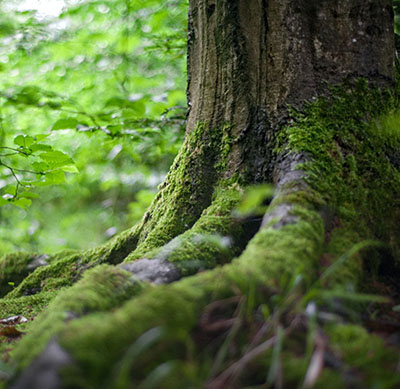 Scientists have noted that during the past 50 years the weather around the world has become much more extreme. We hear from time to time in the news of yet another natural disaster: a devastating hurricane in the Philippines, an unprecedented drought in Australia, severe floods in Europe, snowfall in Egypt for the first time in 122 years. Every day the temperature hits new records: in Europe we experience exceptionally hot summers, and then in winter temperatures can plunge suddenly from above zero to minus twenty.

Such freak weather conditions are referred to by scientists as weather anomalies. For example, unusually cold periods in the summer or a prolonged thaw during the winter are the most common weather anomalies in the areas with temperate climate in the Northern hemisphere.

When weather anomalies pose a threat to the health, life and economic activity of people, they are extreme weather phenomena. 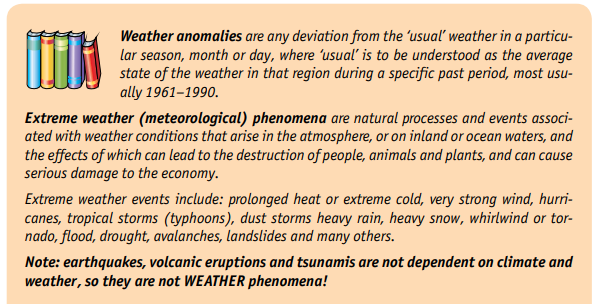 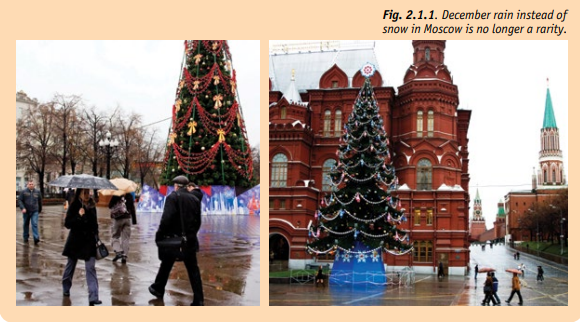 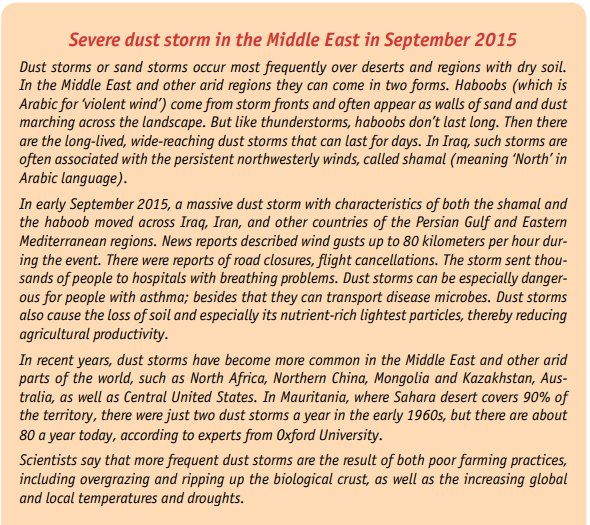 Unsettled weather
So what is happening to the weather and what does climate change have to do with it? Observations suggest that the number of odd weather patterns and extreme weather events is increasing steadily all around the world. Scientists believe that this may be linked with global climate change. As the average temperature on the planet rises, evaporation of water from oceans, lakes and rivers increases. So the amount of moisture in the atmosphere increases, which leads to heavy rain in some areas. Also higher temperatures in the surface waters of oceans are causing highly dangerous tropical storms (typhoons) to occur much more often than they did in the middle of the last century. 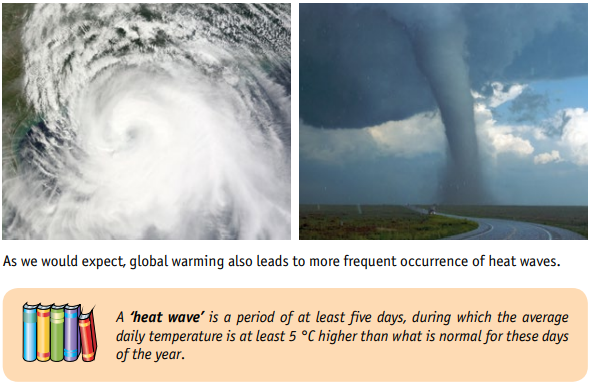 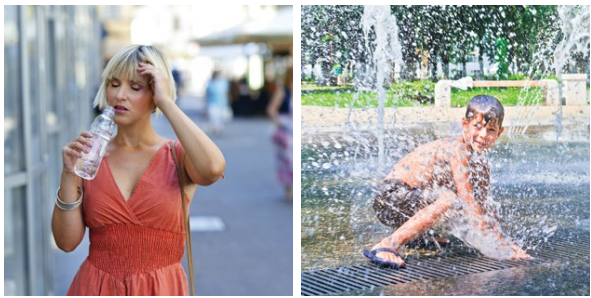 The recent study published in the Nature magazine says that heat extremes that previously only occurred once every 1,000 days are happening every 200–250 days. However, the effects of warming will vary around the world. According to that study, weather events at the equator will become more extreme, meaning tropical countries already dealing with frail infrastructure and poverty will experience more than 50 times as many extremely hot days and 2.5 times as many rainy ones. But some already dry regions including the parts of the Mediterranean, North Africa, Chile, the Middle East and Australia will have higher risks of droughts and freshwater shortages.
But it is important to remember that unusual weather is not equivalent to climate change. For example, a very cold winter does not necessarily mean that the climate has become cooler. Data must be collected over a long period of time (about ten years or more) before we can speak of climate change.
Weather anomalies can cause huge damage to the world economy and lead to the loss of human lives. 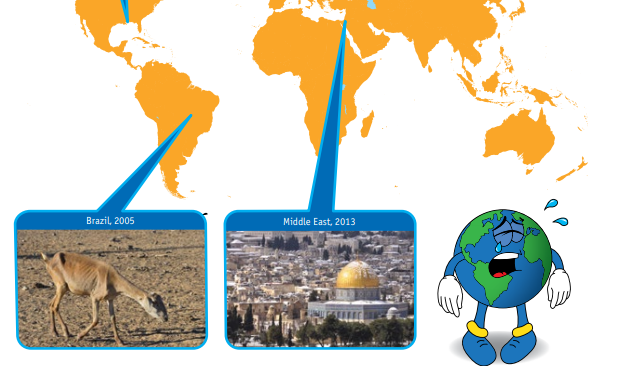 Heat wave in Europe, 2003. In 2003 France, Italy, Germany, Spain and a number of other European countries were hit by the most powerful heat wave of recent times, which began in June and continued until mid-August. In northern France daytime temperatures were above 40 °C for at least a week. Specialists of the Earth Institute at Columbia University (USA) estimated that the intense heat cost more than 50,000 people in Europe their lives. The French National Health and Medicine Research Institute found that the mortality rate in France in the summer
of 2003 was 60% higher than in previous years. The dire consequences of the extraordinary heat wave of 2003 prompted the French Ministry of Health to develop a special action plan for assessing and countering major impact from weather events on human health. Similar plans were subsequently developed in other countries of the European Union. 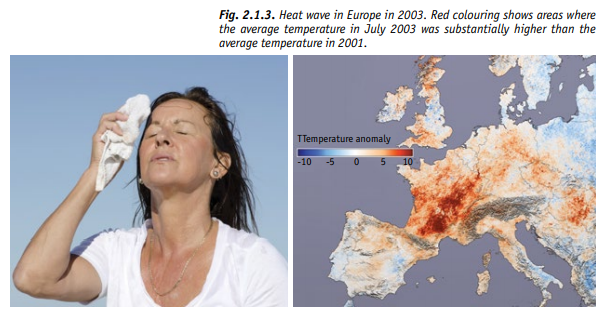 Drought in Brazil, 2005. The Amazon basin of Brazil suffered its worst drought for a century. The rivers dried up to such an extent that people could travel by foot and on bicycles where canoes and motorboats were usually the only means of transport.
Hurricane Katrina in the USA, 2005. Hurricane Katrina was one of the worst natural disasters in the history of the United States. Dams were broken, leading to an avalanche of water, which left the great city of New Orleans in ruins. 90% of residents in the south-eastern state of Louisiana had to be evacuated. In recent years hurricanes and typhoons have begun to affect areas where they did not previously pose a threat.
Flooding in the Far East of Russia, 2013. The end of summer and beginning of autumn 2013 brought unusually large amounts of rainfall to the Russian Far East. The rain was concentrated in the basin of the Amur River. It lasted for about two months, causing extreme rise of water levels in the River. The amount of rain that had fallen in Amur Region by early August was equal to or greater than the amount for the full year. In some places the river level rose by as much as 9 metres! Nearly one hundred and fifty settlements on the Amur River were flooded, and 20,000 people had to leave their inundated homes to live in temporary settlements or with relatives elsewhere.
Cold wave in the Middle East, 2013. An abnormally cold spell paralyzed the Middle East and North Africa in December 2013 and led to loss of life. Snowfall caused schools and banks to close, hundreds of flights were delayed, and local residents were advised not to leave their homes.

Can we predict extreme weather in advance?
Unfortunately, in most cases it is impossible to predict extreme weather phenomena. The maximum weather forecast range is up to 14 days, as the atmosphere changes completely every two weeks and air flows cannot be tracked for a longer period. The most that can be said in advance is (for example) that ‘the winter will be one degree cooler than usual on average’.  Short-term forecasts are much more accurate. Weather forecasts for tomorrow, made by European meteorological services, are correct in 96% of cases, predictions for the day after tomorrow are right in 93% of cases, and 90% of three-day forecasts come true. At present long-term warning of severe weather events is only possible in a very general form. For example, it can be predicted that the extremely high temperatures, which are now seen in northern Eurasia every 20 years, will occur three times more frequently (once every seven years)
by the mid-21st century and by the end of the century they may be repeated every 3–5 years, making them almost a common phenomenon.

Should we put faith in weather lore?
Weather lore is the folklore saying related to the prediction of the weather. Despite its popularity, it is of no help when it comes to weather forecasting. Even in the days of our grandfathers and grandmothers, traditional ways of predicting the weather often failed to work, and nowadays weather lore has completely lost its linkage to specific places where it might have been applicable. For example, there is a saying in English language: ‘Ash leaf before the oak, then we will have a summer soak; oak leaf before the ash, the summer comes without a splash’. It was generally true in certain parts of Britain. But people began to move around the country and even abroad and took the saying with them. The result has been confusion, and weather lore has lost any of the validity it used to have.

What are we to do? How can we deal with extreme weather events?

You don’t need to be a scientist or a climatologist, or even to work for the emergency services in order to answer these questions. The answer is very simple: ‘You have to start from yourself’. You need to be observant and you need to care. To be observant is a fairly straight forward matter: keep up with the latest science news; don’t ignore calls to take climate change into account when you are involved in longterm projects (for example, the
construction of a new railway in the permafrost area should take 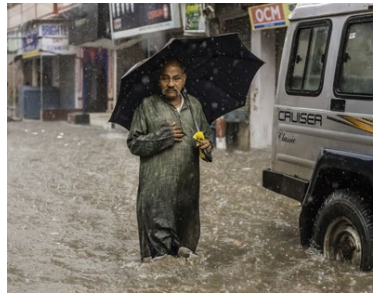 account of the increased permafrost melting). To be caring is
a more complex task: we need to be more careful in our behaviour, to change our habits; for example, we need to learn how to save energy. It would be very useful to know how to behave in extreme weather situations. For example, to be able to provide first aid to somebody who has fainted from the heat. 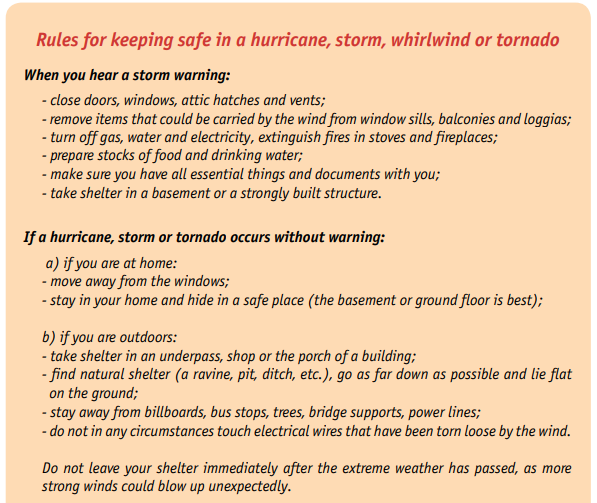 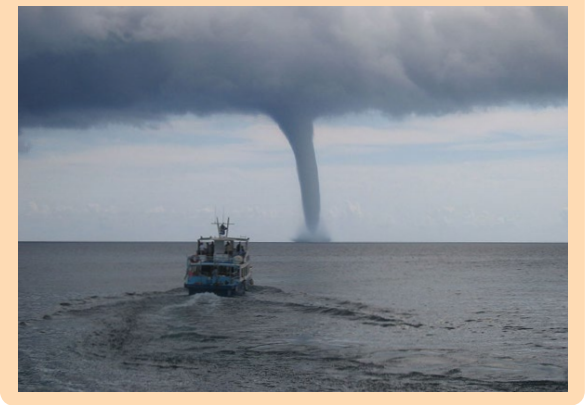