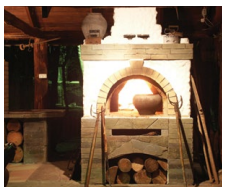 People have different lifestyles – not every family has a car or a complete set of home appliances. But everyone needs a roof over their head. So the idea of building an energy-efficient home has always been of interest. Peasant huts in
Europe and the tents of nomadic peoples were built using special know-how, even if was not always given scientific expression. A masonry heater, which was  traditionally used in houses in Eastern, Northern Europe and North Asia, was a fine example of energy efficiency. The thick walls retained heat and the chimney with its different sections extracted heat from the smoke before it left the building.
Coming back to more recent history, in 1974 a sharp jump in oil prices made it  much more expensive to provide buildings with energy and heat, inspiring architects and engineers to take a new look at building design. Houses started using new environmentally friendly technologies and alternative energy sources. Special demonstration buildings were built to show what could be achieved, and governments in some countries actively encouraged such projects. 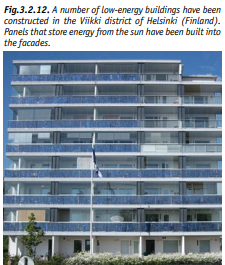 The World Green Building Council was formally established in 2002 with the aim to facilitate the global transformation of the building industry towards sustainability. The Council unites more than 30,000 property and construction companies from 80 countries. Its members are constantly seeking new ways to reduce the amount of resources needed at all stages of the life of a building: during its construction and use, when it is repaired and when it is finally dismantled. Green construction strives to reduce greenhouse gas emissions and water pollution, minimize waste, and to protect nearby natural habitats. Such buildings are somewhat more expensive to build, but the extra investments pays for itself in 5–10 years. Energy-saving buildings are called ‘passive’ or ‘active’, depending on their efficiency. A passive building may not need any heating or may consume just a tenth of the energy that an ordinary building needs. But an active building not only requires very little energy, but it actually produces energy – perhaps even surplus energy to feed into the central electricity grid. Another expression, which you may hear, is ‘smart building’. What this means is that the building in
question automatically analyzes its energy consumption and carries out automatic control of various energy-using systems in the building.

Passive buildings
One of the main objectives of a passive building in northern countries is to reduce heat loss. Ideally, a passive house is heated solely by the heat given off by the people who live there
and by the appliances that are used there. If additional heating is needed, preference is given to renewable energy sources. Bricks made from recycled materials are often used for the construction of such a house. It is not only building’s walls that require thermal insulation, but also its floors, ceilings, attic, basement… even the foundations. It is important to ensure that the design does not permit so-called ‘cold bridges’: apparently minor details and connecting points in the construction that can drain heat out of a generally well-insulated building. These techniques can reduce the heat loss from a building by almost 20 times! 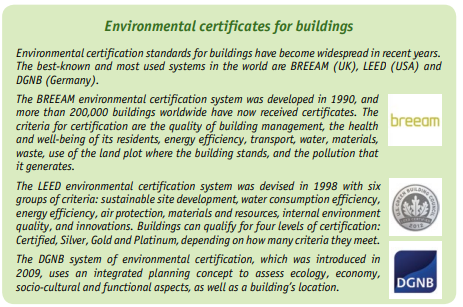 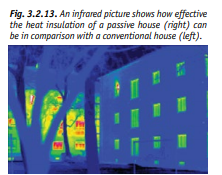 Careful design of windows is highly important: double-glazed widow units are hermetically sealed, panes of glass are covered with a special film that admits light and warmth from outside, but reflects them back when they attempt to pass outwards from the building interior. The biggest windows face the direction, from
which sunlight mainly comes.

The system of heating, air conditioning and ventilation uses resources more efficiently than in conventional buildings. For example, in winter air exiting from the building is ducted alongside air that is entering from outside in a special heat exchanger, so that the warm air transfers its heat to the cold air. In the summer hot air from outdoors is ducted underground where is cooled. Similar principles are used to take heat from used water. Of course, even such carefully designed buildings sometimes need additional heating or cooling, but much less energy is required in
order to provide it. Such advanced design has inherent problems: the air duct must be carefully monitored as accumulations of dust, use of artificial materials, or some other conduction fault can affect the air quality. It is also important to ensure that furniture in such buildings does not release any harmful substances into the air.

Solar cells and (if appropriate) small wind turbines are installed on the roof.

The most economical lighting system (LED) is used and it may even be possible to light the building by means of sunlight alone. Added together, these and various other devices produce savings.
Projects for the construction of passive energy-saving houses are being implemented on an ever larger scale. By 2006, a total of 6,000 passive, office buildings, shops, schools, and kindergartens had been erected worldwide  mostly in Europe). An EU directive calls for all new buildings to be close to energy neutral by 2020. 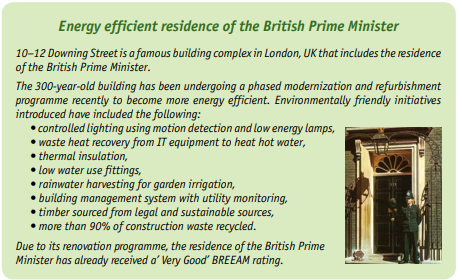 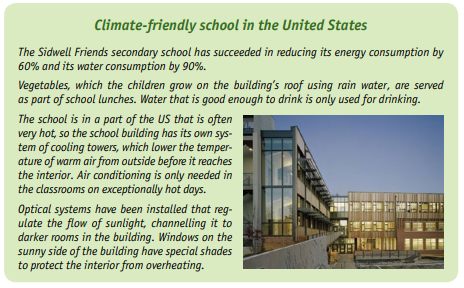 Active buildings
The active building incorporates some of the same concepts of the passive, such as insulation, or optimal solar exposure of the windows. However, it also promotes renewable energy systems, such as solar water heaters and/or geothermal heat pumps. The world’s first active energysaving building was built in Denmark, and Denmark even has an Internet portal for active buildings at www.activehouse.info. 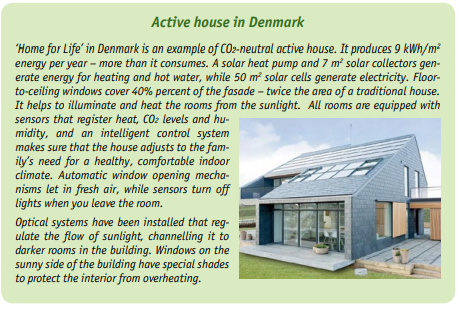