The evolution of living organisms on our planet progresses from the simple to the complex. There was a time when Earth was inhabited by simple organisms and plants, which absorbed the sun’s energy and transformed it into live weight – into themselves. And the traces of their existence is still with us today: the energy gathered by these life forms, our predecessors, has not disappeared but continues to live in what we call ‘fossil fuels’, which are substances that have been formed from the remains of dead organisms. Crude oil, natural gas, coal and peat are fossil fuels.

Fossils fuels are the legacy of living beings that came before us on Earth and we should treat them sparingly and with gratitude. We must remember that no legacy is ever infinite. If we spend it unthinkingly, we will have nothing to leave to our children.

The combustion of hydrocarbon fuels – coal, oil or natural gas – can produce electricity. This process occurs at thermal power plants. The engine room of a thermal power plant is fitted with a boiler and the combustion of fuel heats the water in this boiler, converting it into steam. The vapour pressure of the steam makes the blade of a turbine rotate and the turbine then drives a generator, which generates electric current. The electricity is carried to homes and other facilities by power lines (Fig. 3.1.3). 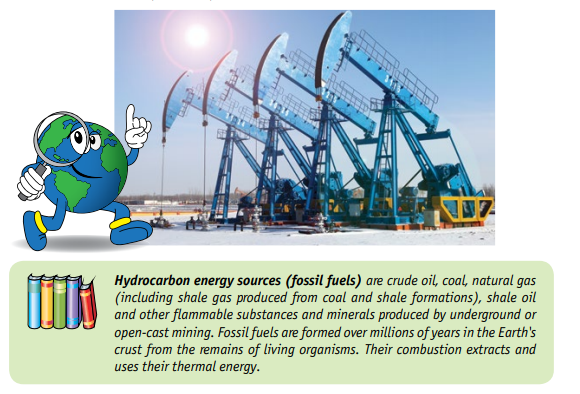 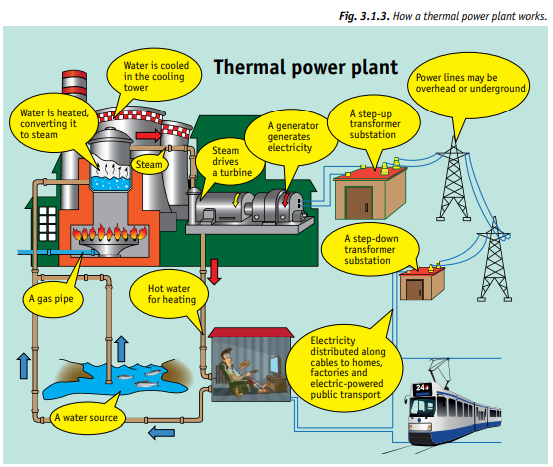 It was found that the production of electricity can be efficiently combined with heating of water, which is then channeled through pipes to the heating and hot-water systems of residential buildings, hospitals, schools and kindergartens, industrial plants and other facilities. Such plants called combined heat and power (CHP) plants.
It is sometime not practicable to channel hot water to apartment blocks from a CHP plant. In that case a boiler house it built, which uses fuel to heat water for the heating systems of local buildings. 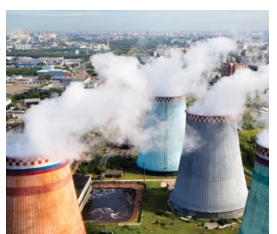 Use of hydrocarbon fuels only became common fairly recently, at the beginning of the industrial revolution. For many thousands of years before that wood, solar energy, wind and water were the most common energy sources, although fossil fuels were already used in some places. Today, fossil fuels account for 81.4% of all the energy consumed in the world and the use of fossil fuels is divided as follows: 31.7% for oil, 28.1% for coal and 21.6% for natural gas (Fig. 3.1.4). 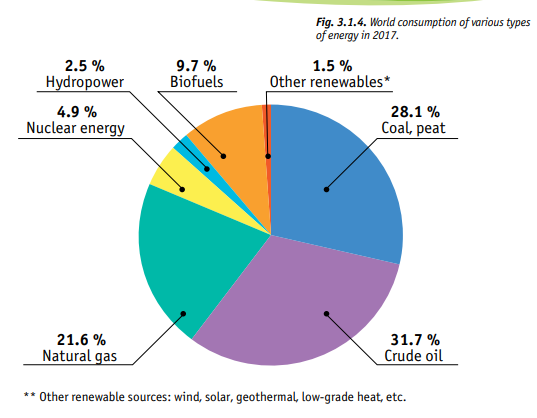 There are two major downsides to using hydrocarbon fuels. Firstly, they are not inexhaustible, and the world’s reserves are being depleted, especially reserves of oil and gas. Secondly, the combustion of natural gas, oil, and especially of coal emits large quantities of pollutants and greenhouse gases, which can be harmful for the climate, environment and for human health.
We have seen that greenhouse gases as such are not harmful for our health, but their accumulation in the atmosphere increases the greenhouse effect, which leads to a rise of global temperature and other climate changes 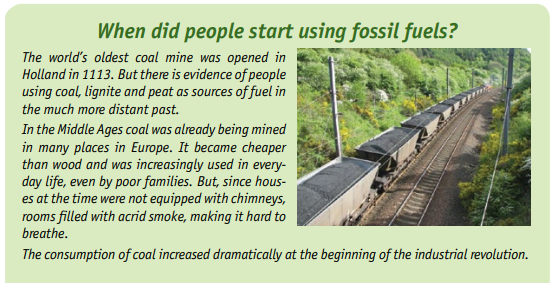 Calculations by scientists have shown that the combustion of fossil fuels to produce energy substantially increases the greenhouse effect. For the sake of the climate, humanity must reduce consumption of hydrocarbons and use more climate-friendly sources of energy. 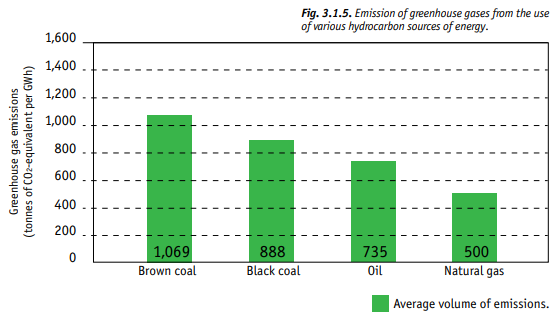