Seeking to explain the major changes of the Earth’s climate that have occurred in the past half a billion years, scientists have looked at various geological, astronomical, biological, geomagnetic and cosmic factors. They even considered the possibility of visitors from other planets, who might have used some sort of climate weapons. But scientists found no trace of action by aliens. What they found was that the temperature on our planet in the last few hundred million years was determined by the location of the continents on the Globe! 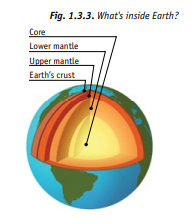 (Fig. 1.3.3). Beneath it begins the mantle, which is the main part of the planet and  which becomes a very hot and sticky liquid deeper down. The crust and top layers
of the mantle consist of relatively hard (‘lithospheric’) plates, which can crack, move apart or come together, shifting just a few centimetres each year, but covering thousands of kilometers over millions of years! This is called ‘continental drift’. The single, ancient continent of Pangaea gradually divided into separate continents,
which moved apart and collided with one another (Fig. 1.3.4). If you look at the western side of Africa and the eastern side of South America, you can see that they fit
together like pieces of a jigsaw puzzle, and the reason for this is that they were once part of one single continent that split apart.

Continents that are close to the equator do not accumulate ice, but if they are close to the
poles, then they are soon buried under the glaciers (ice masses) that we now see in Antarctica
and Greenland. The white surface of ice and snow reflects solar radiation back into space,
ensuring that the ice and snow remain cold, while the dark surfaces of earth or water almost
completely absorb solar radiation and therefore heat up. 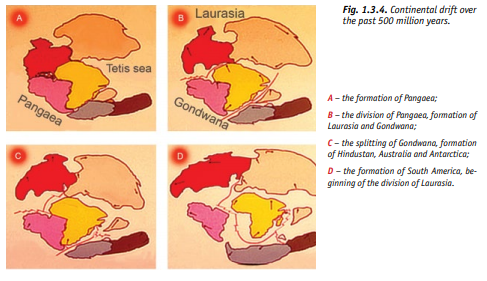 When this occurs over a large area, it becomes the main factor influencing the climate of the entire planet. For most of the time in the last half a billion years the continents had less icecover than they have now, so the Earth’s climate was warmer.

When there was a major change in the climate, particularly when there was a cooling, so-called ‘bio-catastrophes’ occurred: whole species of living organisms died out and only those survived which were best suited to the new conditions.
One of these cold spells about 60 million years ago led to the disappearance of the last dinosaurs. This must have been a gradual process, lasting for more than a thousand years. The exact cause of the extinction of the dinosaurs is unknown, and there may have been several and not just one cause. 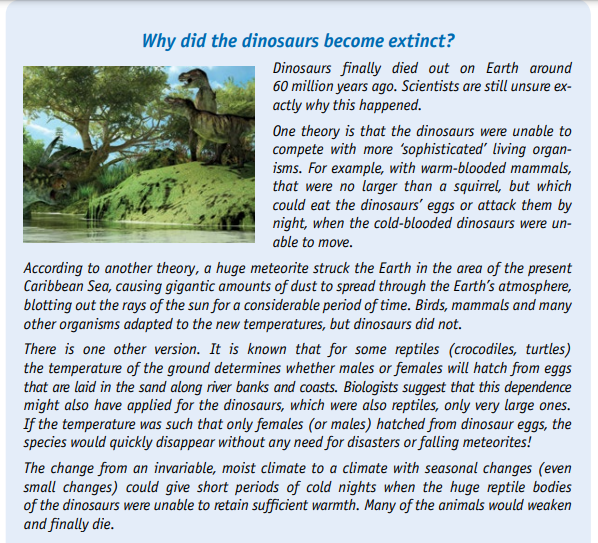 But the most important climate event happened 50 million years ago, when the continents moved away from the poles. Snow and ice cover shrank, and temperatures rose to a level about 12 °C higher than nowadays. Then, ‘suddenly’, India, which had previously been a small, separate lithospheric plate, crashed into Eurasia. The Himalaya Mountains emerged at the place of the collision. The other plates moved around so that Antarctica took its place at the South Pole and was covered with a layer of ice (30–40 million years ago). The temperature on Earth began to fall sharply as the white ice of Antarctica began to reflect solar radiation back into space.
About 10 million years ago Greenland reached its present location and became covered by a layer of ice that lowered the temperature still further, to levels close to those we have today.