The first way to mitigate climate change is to use those energy sources, which cause the least damage to the environment and the climate.
The second way is to reduce our overall energy consumption. In this chapter we will look at two similar, but different concepts: energy efficiency and energy saving.
A device is energy efficient if it uses less energy than other similar devices to do the job it was designed for.
For example, two lamps may give an equal amount of light in your room, but may consume different amounts of electricity. The lamp, which consumes less energy, will be more energy efficient.
We can save a lot of energy by turning off lights when they are not needed, keeping windows, light fixtures and lamps clean, and installing bulbs that are more energy efficient. 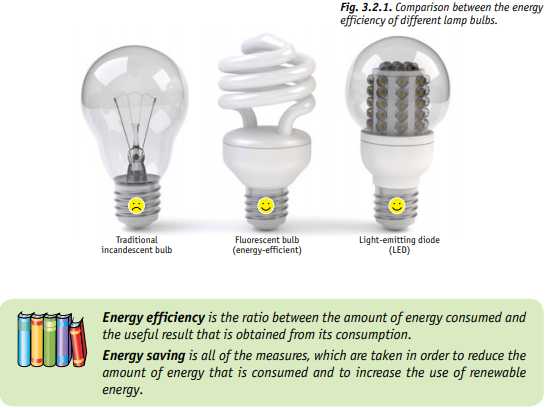 So, for most of the time, there is no need to invent anything in order to save energy. We simply need to change our habits, so that we stop wasting it!

For example, we all brush our teeth in the morning. Do we need to leave the tap running as we do it? No, we only need the tap on when we rinse our mouth. But watch yourself and your family: do they all clean their teeth with the tap off? A lot of energy has to be used to make water come out of our taps, from operations at the water treatment plant to the pumping system, not to mention the water itself. 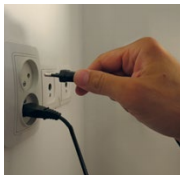 When you turn off the TV (and some other electronic devices), you leave it on standby. What a lot of people don’t know is that the TV goes on using energy when it is on standby, though not so much as when it is working, and that pushes up the family’s electricity bill by a few cents every month. It may not seem worth bothering about, but think how much energy is being wasted, if you count in terms of a whole  neighbourhood, a whole city or a whole country! So, in countries where energy saving is taken seriously, people are recommended not to leave appliances on standby, but to switch them off.

The IT-industry is responsible for about 2–2.5% of global carbon dioxide emissions, and the biggest share of them are from PCs and monitors (together 40% of all emissions by the IT industry). Probably not all of you have heard of ‘green hosting’, a kind of internet hosting service that uses green technologies to reduce negative impact on the climate and the environment. Green hosting works by compensating for the carbon dioxide emissions, which its hosting service causes, by using renewable energy sources (solar, wind, water, geothermal), by planting trees and other plants, and through other actions that save energy. If growth of the IT-industry continues at the present rate, by 2020 pollution from all of the computer systems on our planet will exceed emissions for aircraft. Some experts point to cloud technologies as a promising form of green hosting. Cloud technologies enable much more efficient use of computing power, mainly by reducing power consumption.
Human invention makes new progress every day. But only a small part of new inventions are actually used. Before a new technology can replace an old one, people have to change their habits. 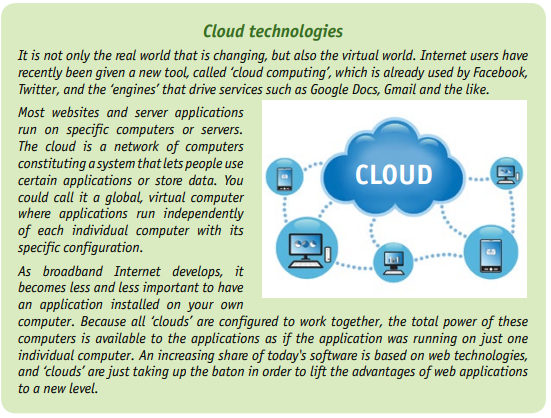 The first thing is to find the time to get acquainted with the new invention.
Secondly, you need to spend money and effort to take out the old machine and replace it with a new one, and to teach people how to use it. This effort and money will certainly be repaid with profit, but not straight away, and not everyone wants to go to this trouble for a gain they will only receive in the future.
Thirdly, people who earn money by selling the old technology do not want to lose their business, particularly if it brought more money than the new technology. They might even do what they can to obstruct the new invention, preventing it being widely used, persuading people that it is harmful, or even threatening the inventor.
A summary of all energy-efficient technologies would require a thick volume. Whatever walk of life you follow in the future, good knowledge of the equipment you use and support for efforts to make it better will be all important. And you should remember that the way forward is not always by making machines more efficient – a lot also depends on how people’s work is organized.
Energy efficiency and energy saving are very important. For families they mean savings on gas and electricity bills. For electricity companies they mean reduction of fuel costs, giving cheaper electricity. For the country they mean spending less on resources, and making industry more productive and competitive. For the climate they mean a reduction of greenhouse gas emissions into the atmosphere.

Each person in Russia consumes about 2 kWh each day on average. An economical citizen manages with 1 kWh, while a more wasteful energy user might be consuming 3 kWh per day.
Fig. 3.2.2. shows how the average Russian, living in an apartment, uses energy for various purposes in the course of a year.
On average, it takes 800 g of CO2 to generate 1 kWh of power. Emissions from power generation in the central part of European Russia are twice lower, because a large part of energy needs in that part of the country are met by power plants using natural gas, hydroelectric and nuclearpowered generating, while coal is hardly ever used. CO2 emissions from natural gas combustion are much less than from coal combustion, and newer combined heat and power plants emit less CO2 than older plants.
In Russia’s northern regions and in the Far East of Russia, where coal is much used for power generating and fuel has to be carried over large distances, reduction of electricity use by 1 kWh gives a reduction of emissions by about 3 kg of CO2. So the annual CO2 savings of three people who change from being ‘average’ to being ‘economical’ consumers is 3 tonnes. 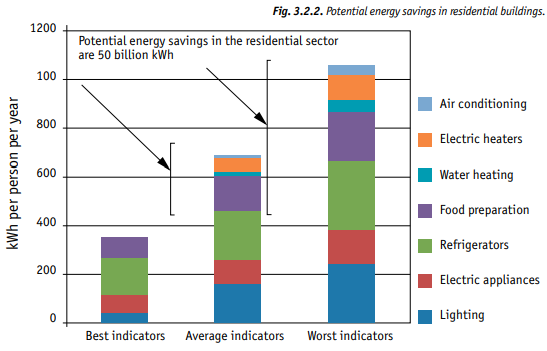