Means of transport, from cars to aircraft, match electricity generating plants as intensive users of fossil fuels. Of course, the fuel needs of a single car are negligible in comparison with the enormous needs of a power plant. But the number of cars is many times greater than the number of power plants. In total, means of transport account for about 13.5% of global greenhouse gas emissions, and motor vehicles alone represent 10%.
The vast majority of cars run on petrol. A modern car burns about 200 litres of oxygen per litre of gasoline. That is more than the amount of oxygen inhaled by a person in a day. On average, a car that covers 15,000 km in a year burns 1.5–2 tonnes of fuel and 20–30 tonnes of oxygen.
The internal combustion engines, which powers motor vehicles, releases exhaust gases into the atmosphere, containing nitrogen, water vapour, carbon dioxide (between 1% and 12% of the emissions volume), as well as toxic and even carcinogenic compounds (soot and benzopyrene).
CO2 emissions per tonne of gasoline, from extraction of crude oil from an oil well to combustion of the refined gasoline in an engine total 3,769 kg.
The impact of transport on climate change is huge, as most forms of transport use fossil fuels the combustion of which releases carbon dioxide into the atmosphere. However, different types of transport have different impacts. Railways are the most environmentally friendly, while cars are responsible for almost 80% of greenhouse gas emissions from transport (Fig. 3.2.3). 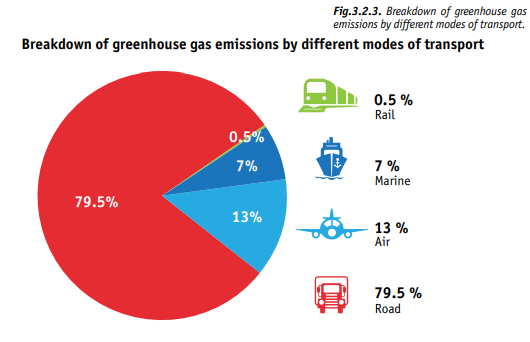 What can be done to reduce the impact of transport on climate?

An obvious and highly effective method is to make contact with people far away by telephone or video/audio communication instead of travelling to them. The most popular way of doing that today is the Skype application, which lets you communicate with friends anywhere in the world where there is Internet.
If you and your parents can choose how you travel, choose a train. Trains are a more environmentally friendly way to travel long distances than aircraft.

Railway transport technologies have made significant advances in the last decade. Locomotives and rolling stock are built from materials that are less heavy and bulky, and engines have become more efficient.
In the French AGV train each carriage is fitted with its own engine, which gives a 20% improvement of energy efficiency.
Japan’s high-speed rail, called Shinkansen (Fig. 3.2.4), has recently both increased its speed and cut back its energy consumption by 40%. By reducing the bullet train’s weight and redesigning the shape and length of the lead nose to be more aerodynamic, the trains are now far more efficient.
Many foreign railway companies take the trouble to remind their passengers of the fact that rail travel is environmentally friendly. 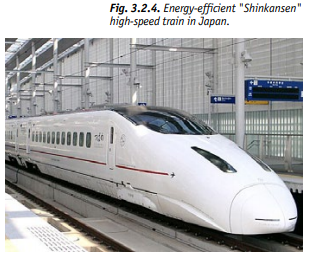 If you fly somewhere by plane, then choose airlines that use up-to-date aircraft: modern aircraft do less damage to the environment than older ones. Speed is no longer the only, or even the main consideration in designing new models of aircraft. Designers today use
a more systematic approach that takes account of the aircraft’s fuel efficiency as well as carbon footprint during manufacture. Developers are looking again at turbo-prop aircraft, which seemed a thing of the past 20 years ago, as jet aircraft are faster. Turbo-prop aircraft could offer good air transport solutions if they incorporate new improved designs. 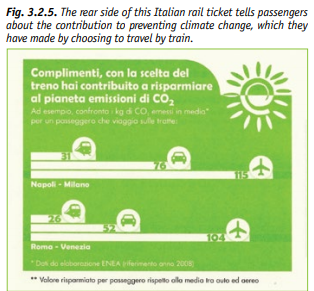 Some airlines nowadays offer services to compensate carbon dioxide emissions by their aircraft and there are Internet services, which calculate CO2 emissions by all flights and invite passengers to compensate them. For example, a long-distance flight from Berlin to San Francisco by Lufthansa produces 1,440 tonnes of CO2 emissions
per passenger. The suggested amount to compensate a round-trip in economy class is 29 Euro, which are used to help finance  environmental projects related to climate change (Fig. 3.2.6). 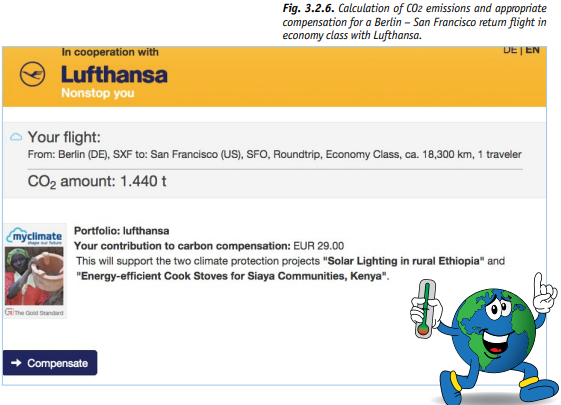 If your parents are planning to buy a car, tell them about the energy efficiency of motor vehicles. Suggest that they buy a car that at least meets Euro-4 standards (the Euro standards for vehicles regulate the content of hydrocarbons, nitrogen oxides, carbon monoxide and particulate matter in vehicle exhaust fumes).
The impact of cars on the environment can also be reduced by following ‘eco-driving’ rules, which reduce the carbon footprint from vehicle transport. Eco-driving does not just make sense for the environment – it is also cost-effective for car owners. Explain that to adults who drive cars!
The efficiency and environmental performance of vehicle engines is crucial. Until recently nearly all motor vehicles ran on fuel oil, diesel or gasoline, but now an increasing number of vehicles are running on gas. Fuel consumption using gas is much the same as with traditional motor fuels, but pollutant emissions from gas are much less. 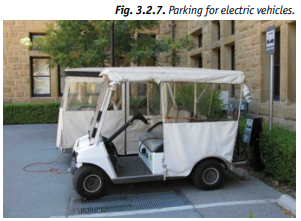 You have probably also heard of ‘hybrid’ cars, electric cars and cars that run on biofuel. There are even exotic vehicles that can operate with nothing but water and air movement to make them go (‘windmobiles’), as well as solar powered electric cars. A solar-car racing championship held regularly in Switzerland is the best place to see all of the latest solar-powered vehicle technologies in action. They are no longer a rarity: there are now solar filling stations in the United States, Bulgaria,
Switzerland, Germany and other countries. 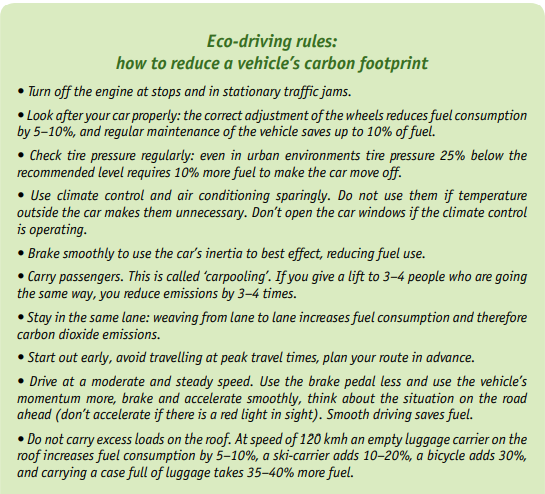 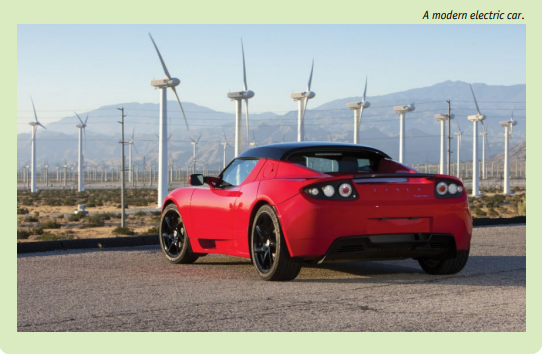 Nowadays, all of the leading car manufacturers, from Toyota to Audi, Ferrari and Rolls Royce are designing cars that are environmentally friendly. Fuel consumption and impact on the environment has become as important to buyers as quality, safety and price. Companies are competing with each other in the effort to save energy and reduce negative impact on the environment.
Greenhouse gas emissions in a city can be reduced by encouraging people to use public transport instead of cars. But that is only possible if public transport is fast and convenient, serves all parts of the city, links the centre with the suburbs and can offer a more reliable and cheaper alternative to private cars. Transfer of public transport to gas, hybrid and electric engines can greatly reduce greenhouse gas emissions and improve air quality in cities. 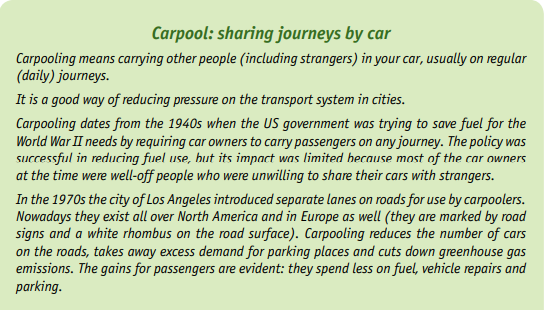 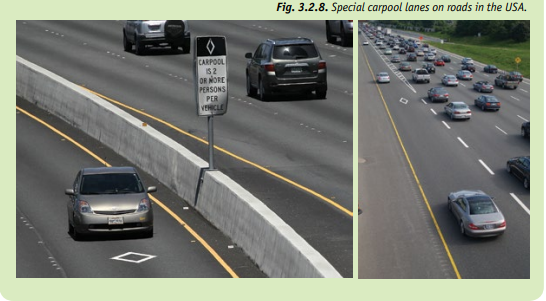 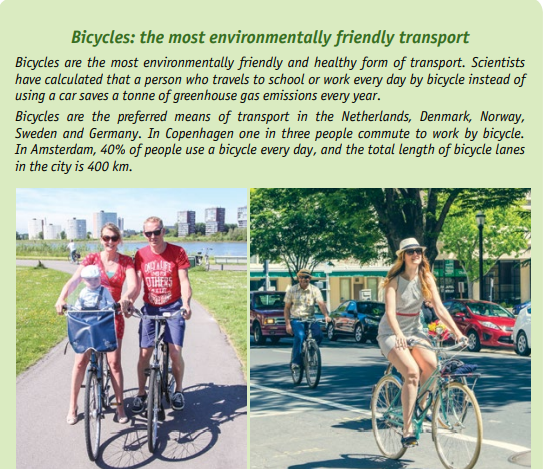