Until the end of the 1970s the only people who took an interest in climate change were scientists. In 1979, the first World Climate Conference was held and a number of reports were presented, which provided evidence that human activity has major impact on climate. This attracted the attention of journalists, then of the general public, and finally of governments. In 1988, the United Nations recognized climate change as one of the most pressing global challenges of humanity. Some of the best scientific minds in the world began to work on the issue of climate change. 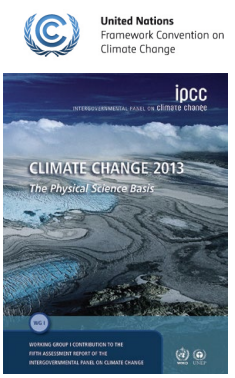 In 1988, the Intergovernmental Panel on Climate Change (IPCC) was set up. The Panel was asked to review the available scientific evidence and show how human activity affects the climate.
The first IPCC report published in 1990 confirmed that the threat of climate change was real and that there was a direct connection between human activity and processes in the global atmosphere. Four more IPCC reports have been released since then, the latest of them in 2013, which assess climate change using the most recent scientific research by scientists from around the world.
Most scientists agree that we can and must find ways of combating climate change. This will only be possible if countries all over the world work together, and the best way of doing that is under the auspices of the United Nations.
In 1992, the countries of the world agreed at a special international UN conference on the need to cooperate on climate issues. The agreement was compiled into an international document, the United Nations Framework Convention on Climate Change.

The Climate Convention only set out general actions to limit and reduce greenhouse gas emissions. So, in 1995, at the first Conference of the Parties to the Convention (i.e. the countries that had signed the Convention), it was decided to prepare a further international document to regulate concrete actions by the Parties into the 21st century

The negotiations to prepare this new document were very complex and difficult. But the countries came to agreement. And in December 1997 in Japan, they adopted a new international treaty named the Kyoto Protocol after the city of Kyoto where it was signed.
The Kyoto Protocol was revolutionary because it contained commitments by developed countries not to exceed a certain level of greenhouse gas emissions in the period from 2008 to 2012 relative to 1990, which was taken as the baseline.

For example, the European Union pledged to reduce its emissions by 8%, Japan by 6%, and Russia and Ukraine not to exceed the level of their emissions in 1990.

The United States, which had the largest amount of greenhouse gas emissions in the world, took an active part in the negotiations on the Kyoto Protocol, but later, in 2001, refused to sign it.
So at the end of 2012 there were two international treaties in force: the Climate Convention, as an international document defining the general strategy for humanity to combat climate change, and the Kyoto Protocol, which established specific commitments of industrialized countries, such as the European Union, and countries with transition economies, such as Russia or Ukraine.
The period of the commitments made by industrialized countries and transition countries expired at the end of 2012 and a new round of negotiations was needed for the next period, beginning in 2013. In 2013, developed countries agreed on further commitments to reduce greenhouse gas emissions in the period from 2013 to 2020, promising more substantial reductions than before.
But, for various reasons, the attitude of a number of countries towards the Kyoto Protocol has changed. The US, Canada, Japan, New Zealand and Russia have not joined the agreements for 2013–2020. Their argument is that the world has altered since the 1990s, and now almost all the growth in emissions does not come from developed countries, but from major developing countries (China, India, Brazil, South Africa and others), whose emissions are not regulated by the Kyoto Protocol. 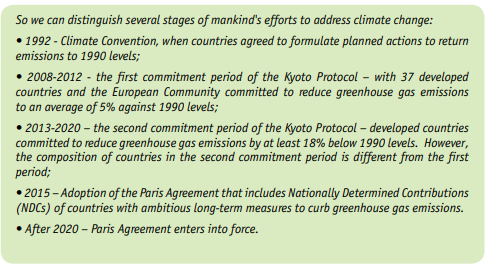 In December 2015, the countries met at the United Nations Climate Change Conference in Paris to achieve a new universal agreement on climate that will be implemented from 2020 and will be applicable to all the nations of the world. In preparation for Paris, governments submitted their climate pledges called “nationally determined contributions” (NDCs) outlining their mid- and long-term national emission reduction targets. The goal is to limit global average temperature below 2 °C above pre-industrial levels.
The Paris, conference looked at a broad range of climate change challenges and solutions including mitigation of greenhouse gas emissions, adaptation to climate change impacts, as well as technological and financial support for such actions. The Paris Agreement is only a legal framework for climate change actions beyond 2020, while more detailed decisions on its implementation are to come in the next few years.
Effective international cooperation can help the world develop along a 2°C pathway and adapt to the climatic changes which are already happening as a result of past and ongoing greenhouse gas emissions. It can also help countries grasp the many opportunities and benefits associated with the transition to low-carbon and climate resilient economies. 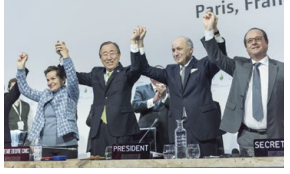 Many other SDGs also relate to climate change, for example Goal 7 ‘Ensure access to affordable, reliable, sustainable and modern energy for all’.
In our modern world of technological progress about 1.3 billion people, 80% of them in rural areas, have no access to electricity. These people, the world’s poorest, make up more than 18% of the total 7 billion people now living on the planet.
Even more people, about 3 billion, use traditional biomass (wood and firewood) for cooking and heating. According to the World Health Organization, pollutants emitted into the atmosphere from the combustion of biomass in inefficient cooking devices, may be causing the premature death of 1.5 million people every year, or more than 4,000 a day. That is more than the total number of people who die each day from malaria, tuberculosis and AIDS combined. These desperately  poor people live in Africa, south of the Sahara Desert (the largest desert in the world), and also in southern Asia and Latin America.
This problem has been called ‘energy poverty’.

Providing clean, efficient, affordable and reliable energy services is the key aspect of global prosperity, and by efficient use of energy resources we can combat climate change. Conversely, a focused climate policy promotes the rational and efficient use of energy resources.
Changes of behaviour and thinking of households and individuals are very important for these efforts. Everybody can make a personal contribution to lessening the impact of climate change by switching to more sustainable consumption patterns, such as cycling, eating a healthy diet, high in fruit and vegetables that are in season and produced locally, to reduce the amount of waste we produce, re-use materials where possible, as well as saving electricity and water.

10 tips for an international negotiator
1. Focus on the issue that is being discussed. Don’t get diverted from it. Don’t pursue side tracks or jump to other topics.
2. Try to find and distinguish the key idea, and focus on content, not on form.
3. Paraphrase what the other person has said and check that you understood him or her correctly (‘If I’m not mistaken, you mean that…’, ‘Do I understand rightly that …’).
4. Ask questions.
5. Respect the silence of the person you are talking too, don’t rush to fill pauses in the conversation.
6. Interpret information both from the point of view of your own culture, and from the point of view of a foreign culture.
7. Try not to read your own meaning into someone else’s behaviour.
8. Don’t hurry to make assessments and value judgments.
9. Learn to recognize non-verbal messages of the person you are talking to (facial expressions, gestures, posture, intonation, etc.).
10. Don’t jump to conclusions based on a single gesture or sign. It is interesting that one of the most successful strategies in dealing with people from other cultures is simply to imitate them. Copying the way your negotiating partner behaves significantly increases the chances of a positive outcome for both sides. So being a chameleon can help you to succeed in international negotiations. In any case, courtesy, respect for person you are talking to and his or her culture, and openness in communication can work wonders. The same applies in daily life

Task 2. Game
Imagine that you are taking part in the United Nations Conference on Climate Change and you are going to discuss the problems of different countries related to climate change. Prepare a brief welcome speech that the head of your state will read to all the Conference participants. The speech should mention:
– the climate and main natural resources of your country;
– how people in your country live;
– the chief sectors of your country’s economy;
– the impact of climate change on nature, people and the
economy;
– what your country expects the Conference to achieve. After the welcome speech the Conference participants express their views on how to prevent the negative impacts of climate change on the environment and on people in the countries taking part in the Conference. At the end of the game, the participants select a winner – the student who made the most contribution to the discussion, and who said the most relevant, well-argued and interesting things.

Task 3. You are a governmental officer of a small island state in the Pacific region. Currently, you are preparing a proposal to apply for international financial support to help your country cope with the negative impacts of climate change. Reflect the following issues in your finding proposal:
1) What expected effects of global warming represent the greatest threat to your country?
2) What is to be done if rising sea levels threaten to engulf the whole of your island?
3) What international organizations and states will you apply to for help?
4) How do you plan to preserve the culture of your country, if your island disappears under the sea?