Different parts of Earth have been warmer and colder at various times during the last thousand years. There were several decades, when air temperature varied by a very noticeable 3–4 °C. Of course, there were no thermometers a thousand years ago (people have only been able to measure the temperature for the last 300 years), but surviving records of fertile (warm) and less fertile (cold) periods are evidence of significant climate fluctuations. Scientists can also drawn conclusions about temperature in the past from deposits at the bottom of seas and rivers and by using other signs. The annual growth rings of trees are a particularly good source of information.
Scientists explain periodic temperature fluctuations over decades by changes in solar activity, volcanic eruptions and processes occurring in the world’s oceans.

Fluctuations in solar activity
The intensity of solar radiation varies periodically and has 11-year cycles. But observations that began as early as the 17th century also show cycles of change in solar activity lasting 40–45, 60–70, 100 and 200 years.

Variations in solar radiation are usually slight, but when several periods of low solar activity come one after the other, the temperature on Earth falls substantially. This occurred, for example, from 1640 to 1715, a period that is referred to as the ‘Little Ice Age’.

This was the time when people in the Netherlands used to skate along the frozen canals of Amsterdam in the wintertime. Soon afterward the cold snap came to an end and the use of skates
became much less common (Fig. 1.3.8). 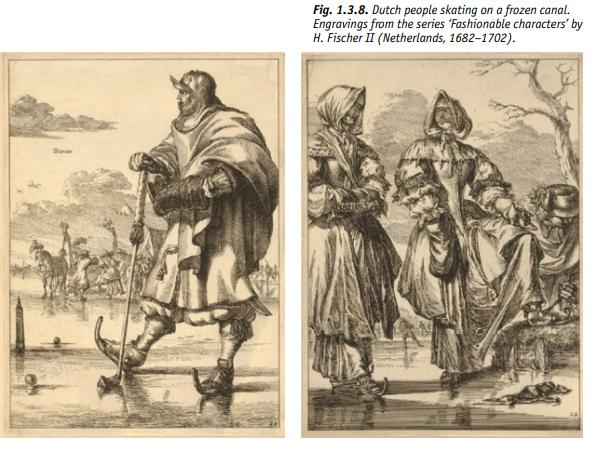 Volcanic eruptions
What natural phenomenon amazes us most by its power and energy? The answer, surely, is the eruption of a volcano. Do you think that volcanoes heat up the Earth’s atmosphere or cool it down? At first glance, it seems that they must heat the atmosphere up. It is true that the hot lava and burning-hot gases raise the air temperature, but only near the volcano. What has the biggest impact on climate is not hot lava or gas, but volcanic ash. The eruption sends it high
into the stratosphere, to altitudes of 10–15 km, where it stays for a long time. The ash blocks out some of the sun’s rays, as a result of which the whole planet gets colder.

Any powerful volcanic eruption, in which a column of ash reaches the stratosphere, causes 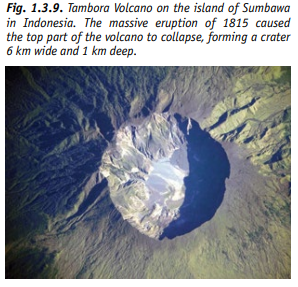 short-term cooling a year later. For example, after the Napoleonic Wars in Europe, people wondered why the climate turned cold for a number of years. The reason was the eruption of the Tambora volcano in what is now Indonesia. The same thing happened in 1983 after the eruption of El Chichon in Mexico, and in 1992 after the eruption of Mount Pinatubo in the Philippines.
After 2–3 years the ash settles, and volcanoes cease to have an impact on the Earth’s climate until the next major eruption throws ash into
the stratosphere.

Such huge eruptions are rare, and most of the eruptions we hear about do not affect the Earth’s climate. For example, the eruption of the volcano with the hard-to-pronounce name, Eyyafyad-layёkyudl, in Iceland in 2010 threw out a lot of ash, but only into the lower atmosphere. Aircraft all over Europe were grounded, but the ash from this Icelandic volcano settled quickly and did not spread around the globe.

Ocean currents
It has been shown that the discovery a thousand years ago by Norwegian Vikings of Greenland coincided with a warm period. Hence the choice of name by the discoverers. Of course, even then Greenland was not completely green: glaciers covered the greater part of the island, as they do now, but the southern edge was ice-free and relatively warm. The reason for this was changes in ocean currents: when they are stronger the local climate becomes a little warmer; when they are weaker it gets colder. This behavior by ocean currents has been sufficient to cause warmer and colder periods in various parts of the world. 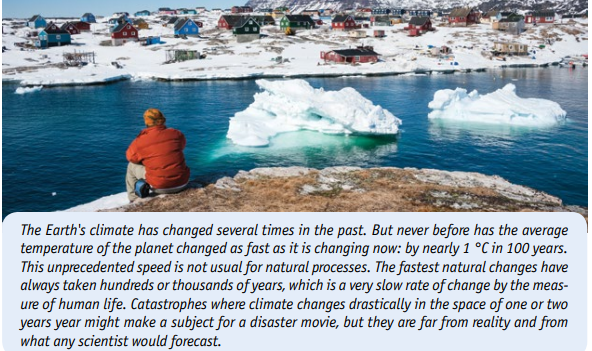